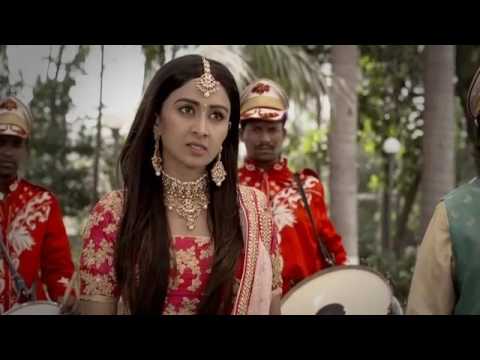 The Heir 16th October 2019 Update On Zee World – The episode starts when Raj ask Mannu why did she not tell everyone that he asked her to call Amba home to meet Simran. He asks her why did she create a scene, I told you to call Amba in front of everyone. Harjeet scolds Raj and goes.

Mohini stops Sakshi and says we have to find out why Raj did this. Amrit takes Simran. Raj says you have seen everything, Simran is safe here, I request you to leave. Amba stops him and cries. She goes. Mannu takes Raj to room. He tries to get water. Mannu helps him. She thanks him for supporting her and Amba. Raj says yes, we have to make Simran fine. She happily cries and hugs him. Bolna mahi bolna…..plays…..

Mohini and Sakshi come and ask what’s happening Raj. Sakshi says you just love Preet, but remember she is a fraud. Raj shouts Sakshi, its late now, you should go to your room. Mohini and Sakshi leave.

Its morning, Mannu gives sweets to Amrit. Amrit says I don’t trust Raj. Mannu says Raj is very good at heart, he was stuck in between wrong people, we should help him come out. Sakshi asks Amrit to give her soup recipe. She says I taught walking to Raj before, I wanted to become his support even this time.

Amrit says Mannu is there to care for him. She scolds Sakshi. Sakshi cries and goes. Amrit stops Mannu and says let her go, give the soup to Raj. Mannu says I will not feed it to Raj. Amrit feeds soup to Raj. Raj cries and hugs her. Amrit goes. Mannu comes to room. Raj asks her to get ready in evening, he has to give her some surprise. She gets glad.

Mannu gets ready and comes downstairs. Raj smiles seeing her and says let me see you well, you are my wife. Amrit smiles seeing them. Raj says Mannu is talented, she knows car driving, she will take me out. Everyone looks on. Raj asks Amrit to bless him. Mannu and Raj leave. Raj says I will do something special for you. They reach the hotel.

Mannu gets delighted. Raj hugs her. Mannu says I can’t express my happiness, I was waiting for this day since long. He tells her about the real surprise. She asks is there anything left. Waiter gets a bowl. Raj asks manager to read the letter for madam.

Manager tells about the contract, Raj will help Mannu get Simran’s memory back, and Mannu will promise Raj to free him from all relations, She will give him divorce. Mannu gets shocked. Raj smiles.

Mannu ask Raj what’s this joke. Raj says its a contract, its written clearly that I will help Simran regain memory and you will go away from my family, our relation will end. She asks did you do this to give me the contract, you could have given me the contract at home, I would have got equally hurt, what did you get by giving me hope. Raj laughs and says my heart wounds will heal when you get hurt, you played many games with me, I told you last game will be mine. The Heir 16th October 2019 Update On Zee World

Mannu says Amrit was right to doubt on you, she asked me not to doubt on you, I was foolish. He says you did magic on her, Harjeet and I promised her that we will not break this relation, but you are free, you will break this marriage. She asks him to atleast think of Amrit, she will die knowing his dirty plan.

Raj says Amrit feels everything is fine between us, now if there is any problem, you will be responsible, till you tell mummy, how will she know, what do you think, I will forget that you took Raman’s life, no I will take revenge from you. She sits down and cries. He asks her to have food and no need to pay money. She signs on the contract and gives him the papers. He says now you can’t deny this. She says now I don’t want to deny Raj.

She says the man who can cheat of love and act of marriage, you can’t be trusted, you always broke my hope, I did not see you are dying to marry Sakshi, I was blind in love, now I can see everything clearly, the guy who can play games with mum, he can’t be mind ever. She scolds him. She says Simran’s memory will come back, the day she gets completely fine, our relation will end, I will not see you by love from now, everything will change. She cries.

She says I would have threatened to tell truth to Amrit, but this difference between Bajwas and Pavaniyas is still there, Amrit won’t know anything from me, if Amrit knows truth, it won’t be my responsibility. She takes him home.

Sakshi says Preet is winning, and we are just sitting here. Mohini says bird can fly high but has to come on ground, I will play some game. Jagan throws the papers and asks Amba to sign. She asks what’s this. He says its written that you will stay in Bajwas house, you have no relation with Pavaniyas.

She gets shocked. He says when you can go to them, you can stay with them, your two daughters are their bahus, no need to clarify now, did you go there or not, Simran and Preet’s names remind me of your cheat. Amba says I hate those Bajwas more, you can’t hate them more. He says I obeyed you by your fake goodness, I hate you more than them, remember one thing, if you go to them, I will forget you are related to this house. He goes. Sukhi says I did your work, I found out about Rohan. Amba recalls Simran’s words and thinks I won’t let Simran get trapped by Rohan, I won’t let this happen.