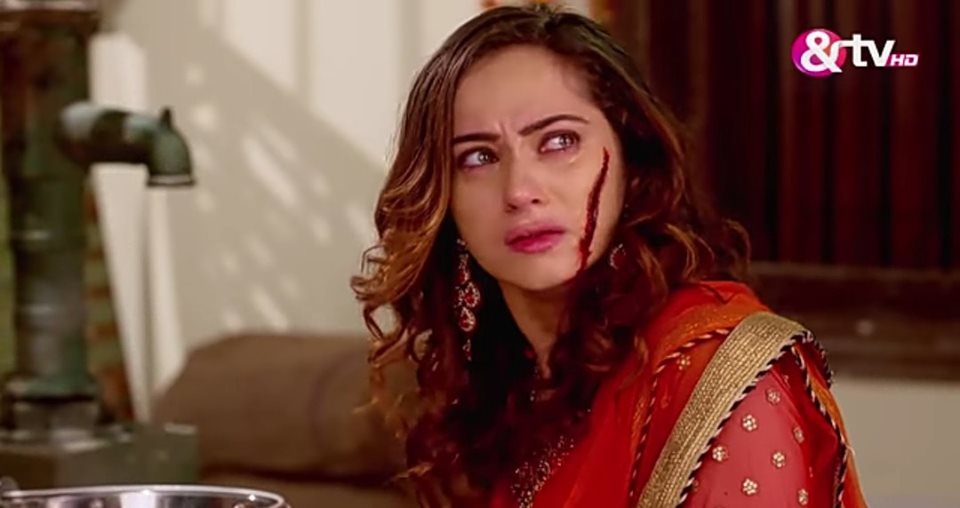 The episode starts with the priest who is about to feed Kheer to Mannu. Raavi bringing Swaroop there and pushes her on the ground. She beats Swaroop. Everyone gets shocked. Swaroop stops Raavi and scolds her for trapping Jagan. Swaroop says Jagan got silent seeing you, you look like a ghost. Deema, Amba, and everyone looks on. Swaroop insults Raavi and asks her to see her face in the mirror. Raavi fumes. Raavi says I will not leave you today. Swaroop shouts enough and holds the stick. Everyone look on.

Swaroop scolds Raavi. She asks Jagan to tell Raavi that he loves her and he is going to marry her, let Raavi be here at some corner, I have a big heart. Deema slaps Swaroop. She scolds her and asks her how dare she come to this house. The kheer falls down. Swaroop asks Deema to ask Jagan, he called me here. Deema asks Jagan what is Swaroop doing here.

Raavi says Jagan is handsome and many women are after him. The cat eats the kheer and dies. They all get shocked. The lady says I think there was poison in the kheer. Amba gets shocked and tells Deema about the poison. The man says maybe someone wants to kill the village head. Raavi says but Amba made the kheer herself. She says Swaroop has come from the Bajwas family, she added poison in the kheer.

Swaroop says I came here on Jagan’s insistence. He has sent a note for me, I swear I did not add anything in this kheer, why are you not saying anything Jagan, tell everyone. Jagan denies everything and asks what letter, show them. Swaroop recalls Jagan keeping the letter in his pocket. She says you have that letter, show them, don’t lie.

Jagan says look at her, she is proud of her beauty and tried to trap me, I asked her to go home, but she tried to kill our village head, we will not leave her. He pushes her. Swaroop gets hurt and her face cheek gets a deep wound. She takes a sickle to kill Jagan. Everyone hold her. She scolds Jagan.

Lala talks to the guests about Swaroop. Biji thinks Swaroop has run away, what should I tell Lala. Swaroop cries as Raavi blackens her face. People laugh. Swaroop is tied to the donkey and taken away. Jagan smiles and recalls Harjeet’s taunts.

Swaroop thinks how Amrit has alerted her before. Deema says Jagan taught a good lesson to Swaroop, she came to kill my grandson, they did not have shame to do this with a baby. She asks Amba to give her Mannu. Amba recalls Lala’s words and says no one will touch my Mannu. Deema asks are you mad, I m his grandmother, do you think I m his enemy. Amba hugs Mannu.

Deema says our enemy is just one, the Bajwas. Bheeru goes to Swaroop, while hiding his face. He beats the men down and saves her. He looks at her wounded face and black color. He gets sad for her. He says don’t worry I will just take you home, not anywhere else. He asks her to go to her area, she can go to her house from here. She goes. Amba comes to her room and recalls Deema’s words. Swaroop comes home with wounded blackened face. The family gets shocked seeing her.

Amrit says I told you not to go and cries. Biji and Lala ask what happened, who did this with you. They cry. Biji cleans her face. Swaroop cries. Harjeet comes and asks what happened to you, tell me, where did you go at the engagement day, who dared to do this, answer me. He asks did you go to Jagan….. answer me. The groom’s family leaves seeing her state. The Heir 18 June 2019 Update On Zee World Series

Lala says no, enemies did this. Harjeet says at least Bauji accepted Pavaniya are enemies. Lala says we can talk. The guests leave. Harjeet asks Swaroop to say who did this to her. She says Jagan and cries. Harjeet fumes with anger

Jagan scold Raavi for not killing Mannu. She says I did all arrangements, that Swaroop….. He says stop it, I will kill Mannu, as the blame will be on Bajwas. Amrit stops Harjeet. He loads the gun and says Swaroop was your responsibility, I will shoot you too. He goes to kill Swaroop first for ruining their name. Biji asks him to kill her first, what brother are you, you take revenge for her insult from those enemies.

Harjeet says why did Swaroop go there, I will kill her. Swaroop moves Biji and stands infront of the gun aim. She asks Harjeet to kill her. He asks him to promise to kill Pavaniyas first. Lala comes there and shouts no. he holds his heart. Everyone get shocked seeing Lala getting a heart attack. Lala falls down. Nekiram tells Jagan that Bheeru has dropped Swaroop to her home. Raavi says Bheeru is supporting our enemies, I will tell Amba. Jagan says I will play a game, go and beat Bheeru so much, that it seems Bajwas have beaten up, he should come home in wounded state, and I will tell Raavi what to do.

Nekiram gets Bheeru beaten. Doctor checks Lala, and says he had heart attack, he is strong. He asks him not to take any tension. Swaroop looks on from far. Doctor asks Lala why is he worried, he has a brave son, lovely daughter and good daughter in law three grandsons, others should worry seeing you. Amba thinks of the cat dying by eating kheer. Bheeru comes home wounded.

Jagan says don’t worry, I will get Mannu. He asks his mother to manage Amba and rushes. Amba cries. Deema consoles Amba. Raavi smiles seeing their evil plans working. Jagan goes to the goons and asks for the baby. He throws money and takes Mannu. He says I have the village head in my hands. The doctor asks Harjeet to get medicines. Harjeet talks to the doctor and goes to drop him. Harjeet asks the man what was he telling Swaroop. The man says she was asking about Jagan.

Harjeet asks him not to tell anything to Swaroop. Jagan is on the way with Mannu and laughs. Raavi acts to pretend and consoles Amba that Jagan will get Mannu. Deema asks the men to get Mannu. They all go to find Mannu. Harjeet stops Jagan on the way. Jagan drives the car reverse and Mannu flies in the air, falling down and hanging to the tree. Jagan hides from Harjeet. Harjeet aims the gun and looks for him. Lala wants to go to stop Harjeet. Amrit asks him to stop. Swaroop says Harjeet has gone after Jagan. Lala cries and tells Swaroop that he kept her away for her to change, but he was wrong, she has shamed him today, if anything happens to Harjeet and him today, just she will be responsible. He goes.

Amrit asks Swaroop why did she tell him everything. Harjeet asks Jagan to come out, show your manhood today, I will kill you. Jagan kicks him and the gun falls. They fight. Harjeet gets his gun and runs after Jagan. Jagan hears Mannu crying. Harjeet loads the gun to shoot Jagan.

Jagan starts acting and says Harjeet, look at Mannu, do anything with me, but don’t do anything to Mannu, leave him. Harjeet gets shocked seeing Mannu and aims at him. Jagan smiles and leaves. Harjeet aims at Mannu. Jagan looks on from far and says Harjeet, you will kill Mannu today. Mannu cries. More Updates Coming…