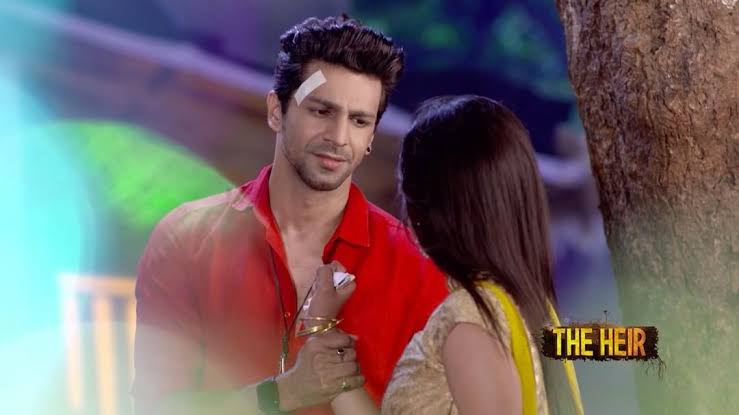 The Heir 19th October 2019 Zee World Series Update – The episode starts when Mannu ask Raj to sleep, she will protect Simran. She asks him not to sleep such that her known people stab him. She says I know Sakshi well and goes. Sukhi says we will kidnap Simran and none will know she is with us.

Amba says how can we kidnap her, it won’t be good for us, Bajwa’s won’t be quiet, pind will get against us, we have to think something else. Babli gets Jagan’s blood report and says its all normal. Raavi takes report. Amba says stop Raavi, Jagan should not know he is fine, this report won’t go to Jagan.

Sakshi lies to Simran and takes her to show surprise. Mohini and Nihaal light bulbs. He says there are current wires in this water, when Simran touches the bulbs, she will get a strong shock. Sakshi surprises Simran. Simran smiles and claps seeing the lights. She hugs Sakshi. Simran touches the things. She is about to touch the boat and holds it. The light goes. Nihaal says how did light go. Lights come again.

Simran plays with boat. Mohini says I will give her current. They see Mannu coming and get shocked. Mohini says even if you tell anyone what we were doing with Simran, none will trust you, Raj will never believe you. Raj comes there and gets shocked.
Raj says I have seen the truth and heard it myself, there is no question of believing it. He calls Rohan out. They get shocked. Simran says hero you came, see the surprise. Rohan says this water is dangerous right, I forgot I have removed the current wires from this water. Mannu says a small hair pin is enough to blow fuse, this failed your plan. She asks Sakshi how is she. Sakshi says Raj, I…. Raj shouts enough, not a word anymore.

Raj scolds Sakshi for cheat. Sakshi says trust me, Mohini told me to do this. Raj says stay away, you did wrong, I told you enmity is with Preet, not Simran. He scolds Mohini for making such cheap plan, I thought Mannu lied to me, it was true, you both have to pay for this, you have to leave from here, one who can kill any innocent girl can do anything, you both are cheap, get out. Nihaal says we won’t go.

Amrit looks on. Raj threatens them to go. Mohini says I won’t go, I have right on this house. Raj insults her. Harjeet comes there and shouts Raj, what’s happening. Raj says Mohini and Nihaal tried to kill Simran, they can’t be trusted, they can kill anyone, make them leave.

Harjeet asks Mohini is Raj saying right. Mohini says yes, atleast I thought this house as mine and did best to end the enemies, I got Simran here to take revenge of Raman’s death, I will kill Pavaniya family if I could, I m against them even today, and you Raj, you are still standing with them, I did not play this game, you are playing game with Mannu.

Raj and Mannu see each other. Raj says you promised Harjeet to keep enmity, what did you do, you said you will make Preet leave, but no, you are in love with Preet, you are making Simran recover. The Heir 19th October 2019…She asks Harjeet to say if she did wrong, she will leave from the house.

Harjeet scolds Raj. He says you became useless and incapable because of Mannu, both my sons are useless, atleast Mohini is thinking for our family, she kept strong enmity with Pavaniyas, they won’t leave, they will stay here, if you talk in loud tone, I will throw you out of the house. Mohini and Nihaal smile.

Raj cries and goes to his room. He recalls his childhood and Harjeet’s words. He cries. Mannu and Amrit come and look on. Raj tries to get up and falls. Mannu stops Amrit from going to him. Mohini and Nihaal get Raj’s phone. She says its Simran’s doctor’s call, we have to see him first. Amrit cries. Mannu says today he has anger in him, this anger will become his strength. Amrit consoles Raj. The Heir 19th October 2019 Zee World Series Update

Mannu thinks Amrit should not know about Raj and her contract. Mannu says Harjeet has hurt Raj’s heart, but he tried to walk today. Amrit says Raj, I m upset seeing all this, I won’t stay here where my son is hurt, we will leave from here, I will pack my bags. She goes.

Raj sees Mannu. She reminds how they framed Harjeet and Amba, how Raj praises Harjeet and got close to him. Raj says yes, but Mannu…. She says Preet….. leaving is easy, but you have to fight for Amrit and Rohan’s rights, else you can leave everything to Mohini, I will leave from this house, you won’t need for contract to get completed, maybe then your life will get things well.

Amrit comes and asks Raj to come. Raj says we won’t go anywhere. Mannu says I will come and goes. Raj makes Amrit sit. Raj tells Mannu’s lines. Mannu hides and hears him. Raj says I can’t lose so soon, I can win, I know this, all this is yours, its your right, none can snatch your right, Mohini will leave from here. I will prove to Papa that his sons are not useless. Amrit cries and hugs him.

Raj stops Preet and thanks her for making him realize who is his dear one and who is outsider, thanks to make him realize he is Raj Bajwa, he will not run away by losing, you can’t go before the contract ends, I don’t want your favor. She smiles.

Mohini and Nihaal come to the doctor. The doctor thinks I have to send this Pendrive to Raj, it has a recording of Simran’s hypnotherapy session, maybe he will understand what Simran was trying to say. Mohini sees him. Babli takes reports for Jagan. He asks what’s it. She says it’s your blood test report. Amba, Raavi, and Sukhi look on.

Jagan checks the report and says it’s written in English, who will read it. Babli asks shall I read. He asks do you know reading, fine read it. Babli reads. He asks the meaning. She says it means the result, a severe case of Anaemia, blood is very less. He gets shocked. He asks is my bloodless, how to get blood. Babli says from family. Amba apologizes to lie, but this is one way to get Simran back.

Sakshi comes to Raj and apologizes. He says I have packed your luggage, you leave from here for the sake of our friendship. She cries. He asks her not to explain to him, he told her he can’t love any murderer, Preet killed Raman and you tried to kill Simran, there is no difference between you two. She says I did this on Mohini’s saying. He says it’s my last decision. He thinks cheaters have no place in my life after Sakshi goes, Preet’s turn is next. The Heir 19th October 2019