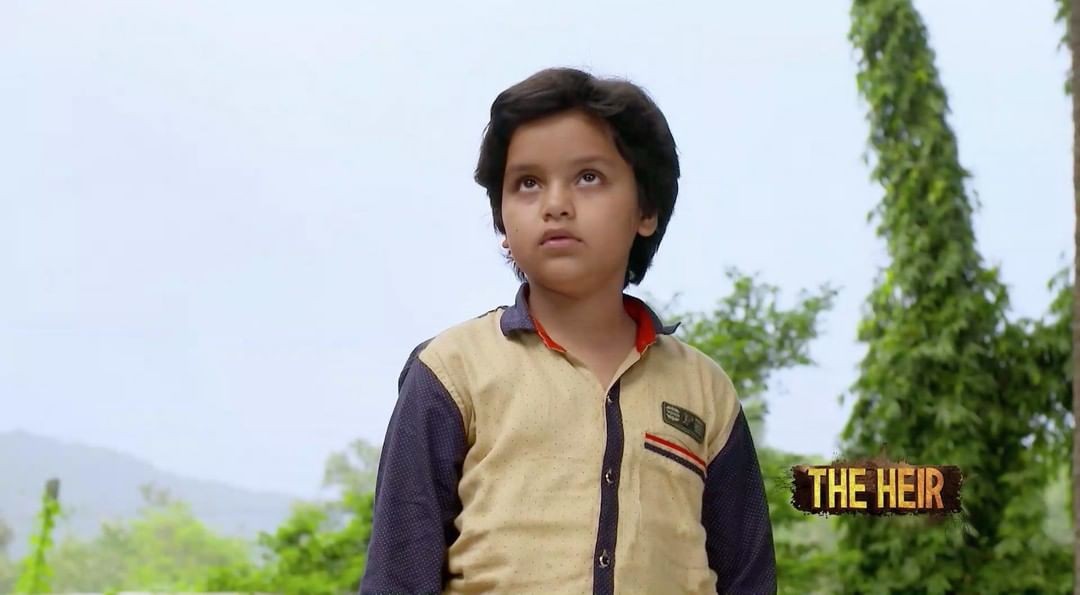 Jagan threatens Amba to sign else he will shoot all of them. Mannu pushes Jagan. Jagan says sign on papers, else your children will become orphan, sign on it. Amba refuses to sign and says I won’t be scared, you do anything you want. Harjeet comes and beats Jagan. Jagan gets angry. Jagan and Harjeet fight. Jagan asks Harjeet not to interfere in his matter. Harjeet asks him to fight with a man, how can we show power to a woman. They fight. Amba and her children look on. Amba asks Mannu, Raman, and Raj to move away.

Mannu says I have to do something. He goes and tickles Jagan to make him lose to Harjeet. Harjeet gets the gun from Jagan and aims at him. Jagan asks Mannu how can he help Bajwas, being a Pavaniya. Harjeet asks Jagan to stop, else I will shoot. Raman and Raj praise Harjeet.

Harjeet says my tiger sons are with me, we will not let you torture a helpless woman, will you leave or not. Amba asks them not to do bloodshed and stop it. She cries. Harjeet removes the bullets and throws. He returns the gun to Jagan. Jagan throws the gun. Harjeet says Amba Ji saved you today, else I would have not left you, thank Amba. Jagan leaves.

Mannu says now Harjeet is sure that Amba likes him, we have to make them meet again. Raman says we can’t tell this to Jagan, else he will doubt, we have to find another way. Mannu says someone who works for Jagan. Raj says there is someone.

Raman goes to tailor and asks him to give Harjeet’s sherwani, such chance won’t come again, the enmity between Bajwas and Pavaniyas will end, don’t tell anything Amba and Harjeet is going to meet tonight, is the special suit ready. The tailor says yes, you go, I will get the suit home. Raman goes. Mannu and Raj look on. The tailor calls Jagan and informs him. Jagan gets angry and says they are going to romance again tonight, I will take Panchayat and expose Amba’s affair, I will drag her by the hair. Sushila says you went yesterday also, you will get fooled even today.

Jagan asks what about that happening yesterday, Harjeet came to save Amba from me, I m playing this game alone, even when you were not here, you don’t sharpen your mind, let me do what I want. He leaves. Sushila says my daughter is foolish, and her husband is more foolish, he is eager to spoil everything. Raman sits as baba. Simran says my mummy won’t meet your Papa here. He says I m going to inlaws alone, even you are not there. She asks what inlaws. He says my words won’t get wrong.

He goes and meets Raavi, saying you are worried for your son, I know, go outside the village, wear red Chunri and pray to the moon, your Mannat will be fulfilled, don’t tell this to anyone, be there at mahurat. Amba says why did you call everyone at 10 pm, we have to meet at 10.30. Mannu says Jagan will take Panchayat at 10, and you can meet Harjeet at 10.30. Amba says if we do it again… Mannu says Jagan fought with Harjeet, we are close to victory, don’t lose courage, I m with you.

Sushila says don’t take Mannu lightly, don’t become fool in front of the panchayat, what time did they say. Jagan says 10 pm. Mannu says reach there at 10.30 and leave everything to me. Its night, Raavi reaches near the tree and prays. Raman and Mannu look on. Raman says why is she doing puja so soon if she goes before Jagan comes, it will be a problem. Mannu says I have to go something. He hits the Kalash in aarti plate by a stone. Raavi gets worried and says I have to get water again. She goes.

Raman sees Harjeet coming and says why did Papa come so soon it’s 10.05. Mannu says we have to stop uncle. Raman walks like Amba and gets Harjeet’s attention. Harjeet smiles and says women are so shy, Amba ji listen. He goes after Raman. Mannu laughs. Jagan and Sushila come there with panchayat.

Sushila says there is no one here, we will leave. They hear anklet sound and see Raavi. They think its Amba. Jagan asks everyone to see Amba’s bad character. He goes to Raavi and says Parjai, now you see how I show your real face to panchayat, your love story will end, get your lover Harjeet. Raavi gets tensed. Mannu laughs. Jagan says see what I do. He asks panchayat to come and see Amba’s real face. He lifts Ghunghat and gets shocked seeing Raavi. Everyone gets shocked. Mannu and Raman laugh.

panchayat laughs seeing Raavi instead Amba. Panchayat says Jagan’s family looks drunk. Raman and Mannu laugh. Jagan asks Raavi what is she doing here. She recalls Baba’s words and says I will not tell you or anyone. Jagan asks her again. She refuses to say. Panchayat asks Jagan to see his wife’s doings, and don’t do this again, else we will get you in panchayat.

Jagan asks Raavi to go home. Sushila asks Jagan to come, there is no one here. Harjeet looks for Amba. He sees Amba and goes to meet her. He says you are here, I was finding you there. She says I was here. He asks am I lying, am I mad to go there.

She says you get angry on everyone like this. He says no, it’s not like that. She says sometimes talk sweetly. She walks ahead. He holds her hand. She gets tensed.

He says I talk sweetly too. Sushila says there is no one, come. Harjeet sings song Meny Ishq ka lagiya rog. Sushila and Jagan hear the song and come to see. They see Harjeet and Amba. Jagan says I will call them. Sushila says till you call them, the love birds will fly, click their pics. Jagan says I will go close and click pics. He can’t click clear pics. Harjeet asks Amba how was it. Amba nods. Mannu and Raman laugh.
Jagan and Sushila go. She asks what happened, you got insulted again, I told you Mannu is doing something, you are a big fool, I will see that Mannu.

Amba cries and washes her hand. Simran asks what happened. Amba says Harjeet touched me, I can’t bear this, no stranger can touch me, I hate myself. Gunjan looks on angrily. Mannu says don’t lose if you break, what will happen of us, we are doing this to wash the blame on you, you got insulted because of Harjeet and Jagan, you will get your respect back because of them, this is my promise. Mannu and Simran hug Amba.

Its morning, Amrit serves food and something falls on Harjeet. Amrit says sorry. Harjeet gets angry and stops. He recalls Amba’s words and says its okay, it happens, you serve food to everyone, I will change clothes and come. Swaroop laughs and jokes. Amrit says I think something happened to Harjeet, I m worried for him. Swaroop says you got habitual to get beaten up, this is our plan and he is changing. They smile. Raj hopes today’s plan succeeds, Papa is changing because of Mannu.

The doctor tells Raman, Raj, and Mannu that this is sleeping medicine, Jagan is using this to make Bebe sleep, it can be harmful. They get shocked. He asks Mannu to change this with saltwater, Bebe can wake up. Mannu thinks to change medicine today. Raj prays Lord to help Mannu. Mannu runs with the medicine bottle. He sees the doctor and collides with him, making the medicines fall. He helps the doctor and changes the sleeping medicine bottle with a saltwater one. Doctor scolds him. Mannu apologizes. He runs and says I have changed medicine, Bebe should get conscious tonight.

Jagan gets a bad smell and goes to check. He sees Sushila drinking wine. He asks you are drinking in the morning. She says what shall I do, you failed my plan, sometimes we get your wife and your son, don’t say anything. She scolds him. He says enough of lecture, mind your business. He sees the doctor cleaning his clothes. The doctor says Mannu collided with me. She asks where. He says outside your gate. She thinks what is Mannu planning. Harjeet gets ready. Raman, Raj, and Swaroop talk of Mannu’s idea to fool Harjeet. Raj says we made Papa sure that Amba likes him. Harjeet gets shocked.

Swaroop says Harjeet is behaving well with Amrit and Raj, who thought two little kids can fool two big men, Jagan and Harjeet do not know this. They get shocked seeing Harjeet. Amrit gets kheer. Harjeet scolds her and gets angry.

Raman sends a letter to Mannu. Mannu reads the letter that Harjeet is coming to meet Amba, we have to make this news reach Jagan, sorry I could not come. Mannu says maybe Raman is stuck somewhere. A man informs Jagan. Jagan slaps him. The man says Harjeet said he is going to meet Amba and asked you to come there if you have courage. Jagan says what does this Harjeet want to do.

Its night, Amba says not today. Mannu says this is last plan, please meet him once. Amba says no, my heart is restless and not agreeing, things will get wrong. Mannu says things will get right. She asks will Bebe get conscious today. He says yes, I changed her medicines, Jagan will get panchayat, I will get Bebe, who will say the truth, meet Harjeet just today, then never, I m going to take Bebe, I will meet you there. She prays nothing wrong happens and this drama ends.