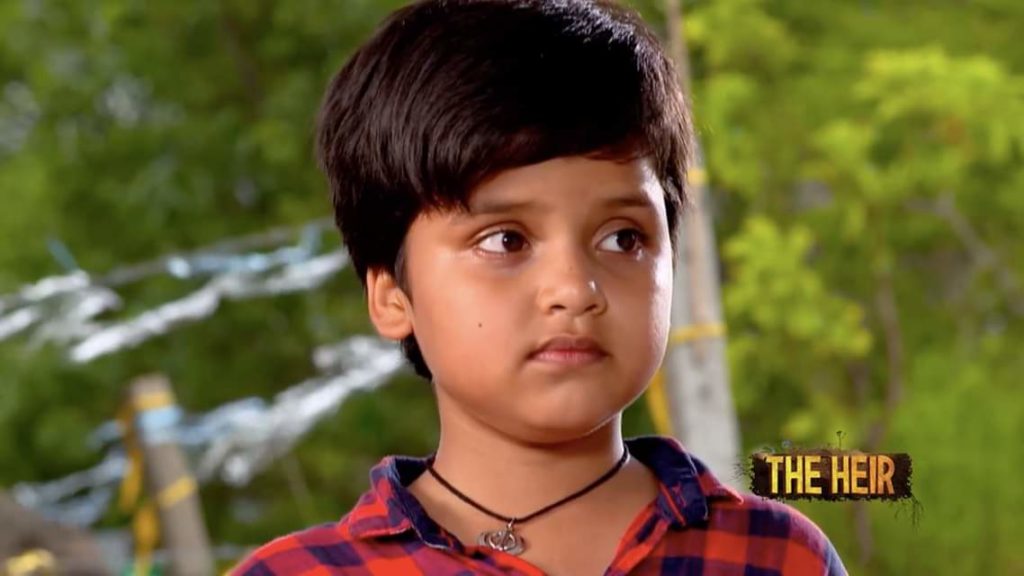 The Heir 9 July 2019 Update – Suraiyya, Raman and others dancing in Simran’s sangeet. Raman goes to Simran and gives her sign to see Mannu. Simran gets shocked. Mannu takes Simran upstairs. Raman leaves and changes his clothes.

Mannu shows Simran to Raman and says Raman will take you from here, you go from here, this is your last chance, just go, hurry up. Raman’s friend says we will leave, else we will be caught. Simran sees Raman and turns away.

Mannu throws the bag and asks you feel Raman is our enemy, he is our friend and wants to help us, everything will get fine if you go, what will we do now. Simran says yes, you are right, I would have gone very far, but how did you think I will run away, I can’t leave everyone, if I go, will Bebe leave you all, how can I leave mummy, she did a lot for me, will Chandar be quiet if I run away.

Bebe will get angry on mummy, I can’t lose you all, I will marry Chandar, when I come back to meet you all, I will see you all happy, that’s my life. He hugs her and asks why are you like this, you are like mummy, you are very good. Amba comes and looks on. She says even I want to know why are my children so happy. She picks the money fallen.

Suraiyya stops Raman. Raman asks whats the matter. Suraiyya says Simran’s marriage is in two days. Raman says what shall I do. Suraiyya says you think I will not recognize you, you wanted to run away with Simran, you are Bajwa’s son and Simran is Pavaniya’s daughter, if you both unite, there will be peace, but this is just a dream, stop this madness and forget Simran. Raman leaves.

Mannu says forgive me, I was just thinking of Simran, my way was wrong, but I won’t send Simran with Chandar, this is my promise. Amba says I don’t want this marriage to happen, if we get to know about Chandar’s GF, we can tell Bebe, this is the only way now. Raman comes home and is worried. The Heir 9 July 2019 Update on Zee World

Swaroop asks from where are you coming. He says I did to make a try, but no use. She asks did you go to meet her. He says yes, I went to make Simran elope. She asks she run away with you, she cheated you. She says she did not cheat me, she did not say she loves me. She scolds him and says she will cheat you, Jagan’s house has no one loyal, he can’t love anyone. He says her name is Simran, not Jagan, I don’t know what happened with you, I love Simran a lot. She tells him that she loves him a lot, this is not easy, there is much pain, you will be hurt, try to understand. He says I can’t sit worried thinking of what will happen, I m hurt even now, Simran is forced to marry, I m not able to do anything, I feel sad. They hear Harjeet shouting on servants. Swaroop leaves. Raman thinks I will keep trying.

Mannu thinks how to stop Simran’s marriage and prays. Raman worries for Simran, how to stop her marriage. Mannu says I hope there was some way to stop this marriage. Gunjan says I wish to slap Chandar. Raman comes there and talks to them. Gunjan says thief. Raman stops her from shouting. Mannu asks how did Raman come here. Raman says we will go and beat Chandar. Gunjan says yes, maybe he will feel bad and they break marriage, but Mannu who is he. Raman says friend.

Harjeet says everyone is mad and beats servant. Swaroop thinks I have to break this marriage, I can’t see Jagan happy, I have to use Harjeet’s anger for this. She goes to Harjeet and tells him about Jagan doing something against them. She says Jagan fixed Simran’s marriage with Bansal and now the land will go to Jagan’s name, we will get surrounded by Pavaniyas, Jagan bought all diesel to run generators for his relatives, your fields will not have generators, get anger out on Jagan.

Gunjan says we will get caught if we go like this. Raman says we will go school and take Ramleela clothes, we will go in disguise and no one will know. Sukhi asks Mannu what are you doing here. Gunjan says I won’t leave him. Mannu says we will take Sukhi along, we will keep him in front, blame will go on him, even Raavi can’t say anything. Gunjan and Mannu act sweet with Sukhi. Mannu asks him to come silently with them. They all leave. Sukhi asks why are we going from back door. Mannu says this is secret trip. The Heir 9 July 2019 Update on Zee World

Harjeet asks his men to beat Bansals, they should leave marriage. Raman, Mannu and everyone take disguise. Raman is irritated by Sukhi’s stupidity. Raman tells his plan. Sukhi falls down. Mannu says just do what we say. They all leave. Chandar is partying. They all reach Chandar’s house and see him drinking. Mannu fools Sukhi about the rasam to beat would be brother in law, he should not see our face, we will get much nek. Sukhi agrees. Mannu says you will go first, think Bansal is Raavan. Sukhi imagines Bansal as ten head Raavan.

Raman says you are Hanuman, we are your vanar sena, you will go first. Sukhi goes to beat them. Bansal sees him in disguise and gets puzzled. Mannu thinks Bansal identified Sukhi, what will we do now. Bansal greets Sukhi as Shri Ram and folding hands. Mannu laughs. Sukhi gets puzzled. Chandar also greets. Sukhi asks Mannu what to do. Harjeet and his men see the big generator. Harjeet asks his men to cut these wires. He sees the party going on and gets angry. Harjeet removes the power line. The Heir 9 July 2019 Update

Mannu says great, this is great chance, lets attack. They all attack on Chandar and his friends. Gunjan thinks I will not leave this Mausi ji. Bansal says forgive me Prabhu and is drunk. Raman sees Harjeet and says Papa ji…. He thinks Swaroop Bua helped me. Harjeet asks am I vanar’s Papa ji. Raman runs. He asks Bansal who is he. Bansal says I m Pavaniya’s Samdhi. Harjeet says I will not leave you. Mannu thinks who are these men beating Chandar.

Jagan is drunk and tells Bebe about Bansal’s deal. Bebe says I said this as family is good, I don’t care for deal. Bansal and Chandar come there with their mean. Bansal says goons have beaten us and you are enjoying here, such an insult, no one did this before, we won’t do this marriage, keep Simran with you, we are breaking this relation.

Simran and Amba look on. Jagan asks Bansal to listen. Bansal says you have sent goons to beat us, there is no protection, we don’t know what happened, why is goons beating us, Hanuman ji appeared there. Mannu, Gunjan and Sukhi come home. Mannu signs Simran. Bansal says I greeted Hanuman and then goons have beaten us, someone has put crackers on Chandar’s Mausi’s saree, if anything happened then what would happen, she got scared. Amba asks who did this. Sukhi gets worried. Jagan asks what are you doing here, did you not sleep. He tells Bansal that people have problem with our relation.

Bansal sees Sukhi and asks is this your son. Jagan says he is my son Sukhi. Bansal sees him as Hanuman and says even Hanuman ji was like him. Mannu and Gunjan get tensed. Jagan asks Sukhi to go and sleep. He says Sukhi is a donkey. Bansal says this marriage can’t happen. Bebe says I will apologize to Bansal. Chandar says what shall I say, we got insulted, we will stay if you say, what will happen now. Jagan says Bajwas are jealous and did this, but when this marriage happens, I will keep Bajwas at your feet. Chandar sees Simran.

Chandar says if anything happens there again… Bebe says then stay here, this is your house too. Chandar asks Bansal to stay here. Bansal says no and falls down. Jagan says I will give a room to Bansal and others can sleep outside. Raavi asks Simran to go and give this medicine to Chandar, he will get relieved. Simran asks how shall I go. Raavi asks why, can’t you walk, will he hold you close, what will happen. She threatens Simran.

The Heir 9 July 2019 Update on Zee World – Simran says I will go, don’t do anything. She goes to Chandar to give the haldi lep. Chandar says you came to my room alone one night before marriage. Simran says Raavi gave this lep for you. He holds her hand and stops her. He asks Simran is she ready, apply this lep to me, don’t get shy. He removes his shirt. Simran gets shocked.

Chandar disconnects the call. Chandar says I don’t want this lep, go from here. Simran and Mannu leave. Simran asks Mannu why are you running, tell me. They go to Amba. Mannu asks Amba whats Chakla. Amba asks what are you saying. Mannu says Kamli Chakle Wali’s call was coming on Chandar’s phone, the girl’s pics was also flashing, its same girl I have seen with Chandar, we can expose Chandar infront of Bebe. Simran hugs Mannu.

Amba says its bad place, you don’t ask this. She says I m going to find that girl. Simran says its not good you go alone. Amba says no, you can’t come. Mannu says I will go with mummy. Amba says girls can’t come there. Mannu says that’s why I m saying, I will come, a man is necessary to come with you. Waaris………..plays……….

Amba and Mannu reach the Kotha/Chakla. They meet a woman Babli. Babli asks Amba why did she come here, she is from a good family. She asks Amba what does she want, you got this little kid with you. Amba says its about my daughter’s life, a mother is not scared to go to hell, this is just Chakla, I want to make Kamli meet my mother in law, my son has seen Chandar meeting Kamli, I want to save my daughter, Chandar beats Kamli. Babli says call Kamli. She tells Amba that you came for family and all girls here are like my family, I don’t force anyone.

Simran tells Gunjan that Mannu has seen everything, mummy has gone there, everything will be fine. Gunjan says we will beat Chandar’s family. Simran prays. Kamli comes there. Mannu says its same girl. Amba says Kamli you have to come with me. Babli says Kamli won’t go anywhere. She asks Kamli will she go and expose Chandar. Kamli says no, I get money from Chandar.

Amba cries and asks her to save her daughter’s life, if you don’t tell Chandar’s truth, he will marry my daughter, she will die. Babli says Kamli refused. Amba requests them. Babli says I told you, I don’t force anyone. Mannu shouts stop and aims Gulel at Babli. He says I have to take Kamli for my sister, no one will stop, else they will get hurt. Amba asks Mannu what are you doing. Babli smiles. A man hits Mannu and says Babli refused, leave now. Mannu asks what will happen now.

The Heir Teasers for July 2019