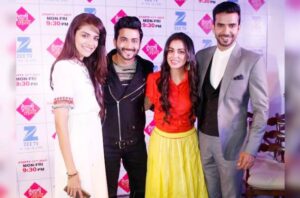 Kartika gets a call and it is Prithvi, he asks if he could talk with Sherlin, Kartika says that she met an accident and he phone is with her, she does not recognize him, he gets relieved and then makes an excuse saying that he is her family carpenter, she is not convinced and tries to look into it.

Rithwik gets a call and it is Manisha who says that she feels that Prithvi is a fraud and will not give them the money, there is a network problem and they both cannot hear each other. She says that she will not get the money and will get married with Karan who will then divorce her and she will have to bear the consequence, he asks her to not worry as he has got a very nice clue gains Prithvi.

Rithwik say that he has planned a lot and that they will have a new game tomorrow.

Sarla asks everyone to get up and have tea, she comes and is still sleepy, she rests her head on Sarla and sleeps, not listening to what she has to say.

Preeta comes and tells that she is going to the Luthra house because she has to make Karina feel better, she leaves saying that she must leave, after she leaves Shrishti asks Sarla to praise her and say good things about her now that none is at home.

Karan is looking at his dress and admiring it, Preeta comes and asks why us he so happy now that he will get engaged but it will be in the evening, she says that she came to fix Karina’s feet, he turns and in shock ask what she is dong because she was supposed to be at the hospital

He says that she went there but came back after seeing Sherlin’s mother, he gets angry but she says that she made all the arrangements and will get the call after the reports come, he is not able to understand and asks what happened.

They both start to fight and he says that he will marry her if her plan does not succeed, they start to fight and hearing their loud voice and tone, Rishab comes and tries to calm them down, saying that everything in the room is shaking, he asks Karan what happened but Preeta says that why is he not like him. This Is Fate 16 May 2019 Update

Karan comes and says everything, mentioning that he told Preeta to stay at the hospital with Sherlin so that they can prove her pregnancy, he does not see the signs that Preeta is giving him to be quiet, Rishab hearing this gets very angry and leaves the room.

Karan asks Preeta to not be worried as he will handle the situation, Preeta also says that he must handle it and leaves the room, cursing Karan.

In the hospital the receptionist is talking with her mother confirming her that she will eat the dinner as she will come home late because of the work, a nurse comes and hands her the reports of Sherlin, she also gives him a report to hand to the other doctor

She gives Sherlins reports to another nurse who sees the Pregnancy reports and decides to call Preeta thinking of what she said to her and requested. She decides to call Preeta, she tries to look for her prescription book but is not able to find it, the other says that she can take a new one but she says that she will only take the same book as she has written the number on it, she find it.

Dadi comes and sits on the sofa, Preeta comes and greets her, she asks her to go and get ready, after she leaves, Dadi takes out a bottle and drinks some drink, Just then her phone rings and Sarla come, she hides the glass, then tries to make Sarla go away but she realizes and finds the glass, Dadi leaves the room. This Is Fate 16 May 2019 Update

Prithvi enters the hospital and thinks that he has to meet Sherlin as he is very worried but when he reaches the hall, he sees Sanjana who is waiting outside the room, she quickly hides the glass, just then he sees a doctor passing by an asks him to give him his mask but the doctor denies, he gives him a bribe and so the doctor gives him the mask, he is about to enter the room just then Sanjana stops him and after seeing that who it is she gets really mad.

Shrishti is looking for a dress and is not able to find it, just then Preeta enters and is amazed to see what a mess she has created, she scolds her and then says that she must wear the dress, but Shrishti says that she will not wear the same dress as Kartika,

She gets confused and ask her the reason, Shrishti says that she only says this to keep her loving them as otherwise she will get bored, hearing this Preeta hits her and says that she has become very naughty.

This Is Fate Season Finale On Zee World