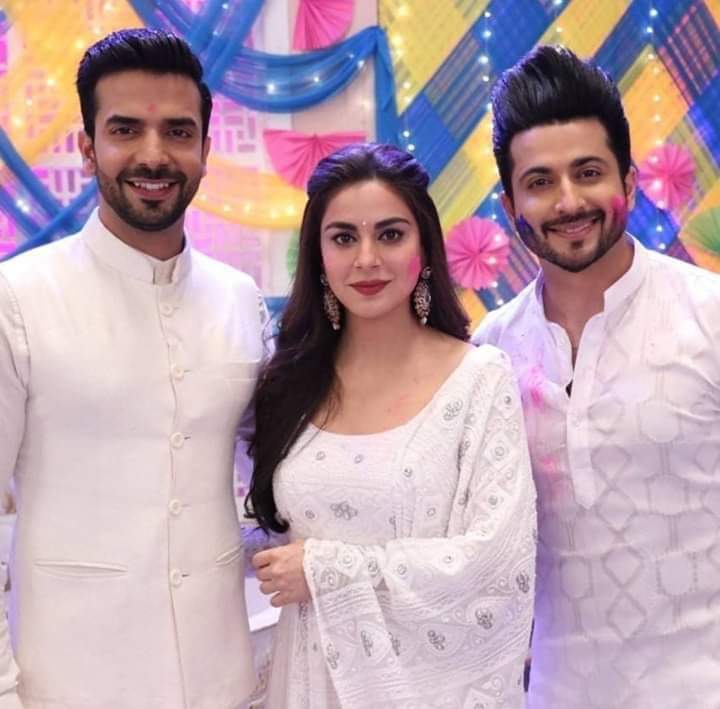 This Is Fate 29 May 2019 episode starts with Karan receiving a call from Dadi he sats that the doctors are saying that she is better and will regain consciousness very soon, Preeta and everyone walk towards Janki’s room and hear a sound m, the rush inside and found her almost falling, when she is stabilized she points towards Prithvi, they cannot understand and she gets unconscious. Preeta notices that the oxygen pipe was taken out, she herself inserts it and gets really tensed.

He walks out care free, he sees Rishab coming towards him they stop him even when he is about to run, Rishab starts to ask again and again about Janki, Prithvi does not answer, Sherlin sees that he is I a troubled situation and goes to take him out, Rishab gets mad asking why she came to call him. She says that she was walking by when the staff was looking for the doctor, so she came to call him.

Rishab enters the room, and is shocked to see everyone panicked, she tells him reading the incident, he calls the doctor, Preeta starts to yells at him for not taking care of their patient, and she is calmed down by Karan. The doctor explains that it is because of her movement and she will be alright.

Sherlin says in excitement that Janki is called, he also asks in surprise about where she has heard it, she says that he has killed her, he says that he was not able to because just when he was about to kill her the Luthras came and once again like all the times prevented him from killing Janki, She says to him to go back and comfort them all, he says that he is afraid but she pressurizes him and he also agrees.

Preeta is trying to examine Janki, the doctor says that he can look after her, Karan asks her to calm down and behave, Prithvi enters and is acting like he is amazed to see Janki, he gets jealous after seeing Karan close to Preeta and goes to her acting that he really cares for her family, Rishab gets curious and asks Shrishti that he cannot understand him anymore and not knows what he means, she says that she does not believe that Prithvi is a businessman because otherwise Rishab would have met him, he thinks that he has seen him somewhere and must find out where it was.

The doctor asks for some time, Prithvi gets closer seeing that she must have been feeling like hurting and if she opens her eyes then he will be in big trouble, just then she open her eyes and he falls eyes, everyone starts to look at him, Karan picks him up asks why he feels and says that he got scared when Janki opened her eyes, thy all look towards ask and says hat she must get well quickly and come home, the nurse comes saying that they must not go and Create a mess inside the room.

Karan and Preeta are walking and looking for a ride him because his car is out for servicing, he says that they will get a ride but when the car moves away, Preeta taunts him, he sees a beautiful car and when it stops he asks the owner if he can drive the car, he says that he is a big fan of Karan and will be obliged, they both sit and move away.
They both really admire the car of the owner and are amazed of the features in it, Karan takes a wrong turn but is really admiring the car and is sure to buy it in the future.

Prithvi is wondering where Sherlin is because otherwise she would have been in a lot of trouble, Shrishti asks Prithvi if he is okay he says that he has just a little pain, she say that his pain became her fortune because when Janki opened her eyes he was the one who saw her and it would be really nice if she saw her.
.
BI jee asks SHrorsjti top sit, she says that she feels Janki’s wanted to see her first because she loves her he most and when she was about to say it she feel and even if she regained consciousness then would have again got into the state. THis Is Fate 29 May 2019 Update

Rakhi says that she feels blessed that Janki got better and was no longer paralyzed. Samer says that when Janki will be consciousness she will say everything of the one who attacked her, Rishab also prays that they find the person responsible. Prithvi hearing this decide to leave and runs away.

Shrishti prays that Janki get better, Sarla says that she will no longer fight with her as she really misses her, Rishab is very amazed to see the relation.

Prithvi is thinking about what will happen to him now that she is better, Sherlin also comes
confused saying that Janki is alive. He says that she will destroy them if she gets better and now no one cares for him and instead prefer the servant. They both start to plan what they will do now and what will happen to them if she get better, she tries to calm, him down but he is very worried and asks her to not believe in him so much, he gets paranoid.

Karan asks Preeta to move forward, he say that when she gets better she will call Janki to the stadium, she starts to argue saying that when he call s Janki he will lose his biggest fan, he says that he will still have her and if she is not his biggest fan then who is she off. They start to argue and he asks at which she says that she will remain it as a secret.

Karan gets mad and when Preeta goes away he doesn’t follow and moves away while still being angry,
Preeta asks the nurse if everything is okay and whether they can meet Janki, she says that she can.
Sherlin is trying to calm Prithvi down but he cannot remain strong and falls down.
They all enter the room and are very happy to see Janki awake.

The nurse brings the report of Janki, Preeta says that she and everyone else were really waiting for her smile, she starts to cry at which Shrishti taunts her and says that she must be smiling, she says that she will not cry and it is only because of her sister.

She says that Janki took a lot of time to get well and they all were waiting for her, Sarla asks why she took the bullet as it w ament for her and she must not have come to her aid, Karan asks her to not cry and that she must remain strong for her family. Shrishti starts to cry, Sameer asks to take her out, Rishab hearing this asks why he is so caring so much, Samer explains that he was only trying to cheer her, Shrishti says that Janki can tease her as much as she was because she also teased her a lot, she asks her the name of the person who was behind all her problems.

More Updates On This Is Fate