Nikhil follows Dr. Anjali and thinks if she had agreed, then this thing wouldn’t have happened!

Abhi tells Pragya to button his shirts. Pragya says can’t you do it? Abhi says you always made me ready for the party, at least help me. Tera Yaar hun main plays… Abhi asks if we can’t stay like this? Pragya says no! Abhi asks who will be upset with your union? Pragya goes. Abhi goes behind Pragya and touches her. Her dress gets pulled and tears up. Abhi asks her to wear his outfit. Pragya refuses. Abhi says I want to help you. Pragya says I will ask help from someone. Abhi says King is your brother and asks her to come to his room. Pragya says walk behind me!

Disha sees Abhi and Pragya going to the room. Abhi tries to put thread in the needle and says it was his mistake, so he will rectify it! Pragya says it is not your mistake and asks him to give her the thread and needle and says she will stitch it. Abhi says you can’t tell me this and tells that he is a rockstar! He asks her not to move, else someone might see. Pragya says there is nobody here except us! Abhi says really? He says I will do it, and still tries to put thread in thd needle. Twist of Fate 29 May 2019 Update

Tanu is crying in her room and thinks of Abhi and Pragya’s hug in the bathroom. She thinks of Pragya’s words and says I will not let you snatch Abhi away from me, I have stayed with him more than you and asks her to go away!

King’s Aunt is stressed thinking about King and Aaliya’s hugging each other. Granny tells that time is changing so fast, we don’t know who will be with whom in the future! She says Son-in-laws should be like King, and Daughter-in-laws should be like Pragya! She says Pragya and Abhi look the best. She says King and Aaliya look good together. King’s Aunt is shocked and asks what did she say?

Dasi makes excuses and says what we see is not real. King’s Aunt excuses herself and thinks they are mad people! He thinks maybe King likes Aaliya and that’s why Pragya has chosen Abhi. She thinks Kalyug started from this house! Dasi says you always trap me and I always save you! They laugh. 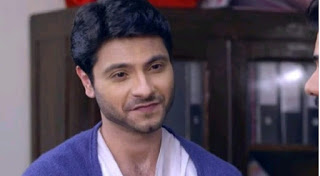 Nikhil calls Tanu. Tanu asks why did you call me and says you have already ruined my life and asks if he will waste her time! Nikhil says when you start respecting me, then you will know what I can give you. He says he came to know about the report and asks her to come to the back side of the house.

Abhi stitches her dress and rests on her shoulder, feeling sleepy. Pragya gets emotional. Tu hi pyaar nibhana yaara… Pragya asks when did he learn? Abhi says it was his first time. Pragya says you are an expert to make talks. She says she will come in 10 mins and asks him to be there. Abhi says we can make it 5 mins.

King asks a waiter about Abhi’s room? The Waiter tells him. King looks at Aaliya and smiles. Aaliya thinks why is he smiling, looking at me? King says I am talking to you and asks how is she now? Aaliya says you should ask me how I am? King says you are like a child. Aaliya says I am a strong woman, whatever happened inside was a weak moment. King asks if she enjoyed seeing her bad side? He says he saw a weak Aaliya who needs a companion and she is a good girl.

Aaliyah says she doesn’t want his concern! King asks her to let inside Aaliya come out and says she might like concern. Aaliya hits his foot. Granny asks what happened? Aaliya says he is teasing me! Granny says King is teasing Aaliya. King says I saw her in the room and stops saying further. He says I was teasing her. Aaliya says nobody can tease me! King asks should I tell them that I hugged you? Granny and Dasi laugh.

Aaliya says he was teasing her and goes. Granny says whatever happened was good and says she likes King for Aaliya.

Tanu comes to meet Nikhil. Nikhil asks her to come with him and holds her hand. Tanu slaps him. He holds her hand and asks her to raise it to hug him. He says you have nobody with you, not even Aaliya! Tanu says you called me to say this? Nikhil tells that Abhi is getting his DNA matched with Kiara.

Tanu tells Nikhil that she thought that Pragya wants to snatch Abhi away from her, but it was Abhi who wants to get Pragya back in his life. He says Abhi will prove first that Kiara is his daughter and will then bring both of them home. She says nobody can stop him as Pragya is not married to King. She says until now I have stopped Abhi, but where will I go if everyone comes to know of this?

Abhi comes to Pragya and asks what did she mix in the drink and says he got over the trance. He tells that she should sell her intoxication remedy to a wine company. Pragya says it seems you got out of the trance. Abhi jokes with her. Electricity goes off. Pragya says the guests has come down, and they might get worried and says she will go and see. Abhi holds her hand… Jab tak tujhe pyaar sa plays… He asks if she remembers what had happened when electricity went off last time and kisses her forehead. Pragya moves back.

King happens to see Pragya moving backwards and questions her. He says I saw you moving back when Abhi was coming towards you. Pragya says she was slipping so he held her. King believes her lie. Abhi comes there. Pragya says thanks to him. Abhi is surprised. King thinks
Abhi is on the wrong track and I have to talk to him.

Aaliya slips while talking on the phone, but Purab holds her. She says sorry. Purab says I have seen you staring at Disha and me. Aaliya says you stay here and not anywhere else! Purab says I feel guilty for you, seeing your situation. Aaliya asks what is my situation? Purab says your loneliness and says you deserve to be happy. Aaliya asks him not to act nice to her! Purab says you are Abhi’s sister and you used to love me in the past. Aaliya says in the past! She says it is her choice to always love him. Disha hears them.

Nikhil comes to the party in disguise as a waiter. Tanu gets happy and thanks God, and says she can now take a breath. Aaliya comes and asks if she is talking to herself? Tanu says yes and tells that she is helping herself this time. Aaliya reminds her that whenever she tries to do something without informing her, she gets into problem. Tanu says I didn’t forget and tells that she has made such a plan that Abhi and Pragya will go far away from each other! Aaliya asks what did you plan? Tanu says she will tell her when the result comes.

Mitali sees Nikhil and asks if he came to work or stare at the girls? Nikhil says Madam ji called me so I thought… Mitali asks him to come to his boss. King’s Aunt asks the waiter to bring something for her to eat and says she is hungry. Mitali says he came to work with us and asks him to bring soft drinks for her. King’s Aunt says the waiter will listen to the groom’s family. Mitali asks her to take it herself! King’s Aunt also talks to her rudely. Nikhil sees them fighting and thinks one came to trap me and the other saved me. He goes.

Abhi tells Pragya that King is giving him bad vibes! King comes and holds her hand and starts walking with her. Abhi asks why are you doing this! Pragya says he thinks that we are going home and says they are not going home yet. Abhi falls on them intentionally. Pragya and King hold him.

Purab asks Disha if she is upset with him and asks why? Disha says it is strange that you don’t know why your wife is upset, but could see why someone else is upset! Purab says now I understand and says this didn’t happen suddenly, as he’s just seeing her for a long time and feels bad for her condition. Disha says you felt guilty and that’s why you talked to Aaliya and got relieved, but did you think about how I will feel? She says she will think of his concern wrongly. Purab says she is Abhi’s sister.

Disha says you didn’t know what you have done. Purab asks do you trust me? Disha says I trust you, but I am scared…They see King and Pragya bringing Abhi there. Twist of Fate 29 May 2019 Update

Abhi asks Pragya not to let King hold her hand again! Pragya comes to Disha and asks what happened? Disha tells that Purab saved Aaliya from falling down and advice her to move on. Pragya says this is right. Disha says a wife’s instinct can’t be wrong and says Abhi also felt guilty and accepted Tanu. Pragya is shocked. King calls her.

King’s Aunt collides with Tai ji and says sorry. Tai ji says okay. Mitali comes and taunts King’s Aunt. Tai ji asks King’s Aunt not to feel bad. Mitali argues with her for colliding with her Mother-in-law.
Tarun comes there and asks his Mum to end the matter. Neha asks Mitali to end the matter as well. Mitali says she’s been calling herself ladke wale (Offspring) since long! They insult each other.

Abhi and Purab comes there and see them fighting verbally. Abhi says we have to do something and comes to Pragya asking her to help save Neha and Tarun’s relationship. King asks him to take his permission before asking for Pragya’s help. Abhi says I will not ask for your permission! They begin arguing. Abhi asks King to make Tarun insult them. King says Tarun is enough for you all.

King says I will not fall to your level. Abhi says you have to rise up to reach my level which you can’t! He says the girl’s family always stand with their head high. King says we are groom’s family.

Latest Update On Twist of Fate

Twist of Fate 29 to 31 May Teasers: Will Tanu or Abhi see the DNA Test?