Controversial OAP, Daddy Freeze has disclosed that former BBNaija housemate Tacha has no body odour as claimed by some others in the pepper dem house.

This comes after Daddy Freeze interviewed Tacha on her experience in the big brother house.

Recall that Tacha faced backlashes from fans of the reality show, after some of them accused her of having body odour.

Former housemate, KimOprah first made the revelation in an interview she granted after her eviction on Sunday, July 14, 2019.

Also claiming that the Port Harcourt first daughter has body odour, Mike while in the dressing room on Wednesday admonished Khafi to advise Tacha to apply deodorant. Mercy as well made the confirmation that the Instagram has body odour during their fight, which led to Tacha’s disqualification on September 27.

Meanwhile, singer Zlatan dropped a diss track, mocking Tacha, shortly after her disqualification. The rapper shared a footage on his Instagram page, where he sprays perfumes and saying “ki lo n run, Tacha ti wole” meaning “what is smelling, is Tacha in?”

But debunking the claims, Daddy Freeze who claimed to have close contact with Tacha said she smells good.

Taking to his Twitter handle, he said: Where all the lying dingbats that said she has #BodyOdor� I smelt her myself and I have a powerful nose… @symply_tacha smells goooood” 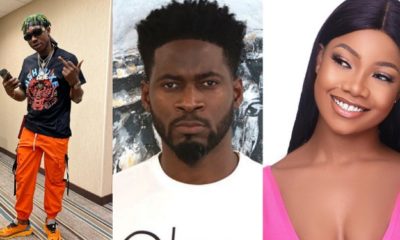 BBNaija 2019: Disqualification of Tacha is unjust if Mercy is not disqualified – says Lawyer