The episode starts with Anika telling him to come that plane can crash anytime but nothing will happen.

He says I want to say something. She says you will get many chances. They jump. He holds her in arms and shouts I love you, I had to say this to you. Some time before, everyone worry knowing plane is on auto pilot mode. Shivaye says let me think. Anika says plane is going to crash. Attendant says there is one option now, parachute jump. Shivaye asks how. She says I will show and jumps down. He asks everyone to take their parachutes and go. Anika says we will live together and die together. He says the same and holds her. They take the pilot.

Bhavya asks Rudra not to worry, she is with him. He asks why are you helping me, I was rude towards you. She says its my duty, policemen can’t forget their motto, I will always there for you.
She holds his hand. Shivaye comes and hugs him. He says I know nothing will happen to you two, Bhavya is with you, I will get Anika and come, be safe.

Bhavya asks him to take care. Bhavya and Rudra hold hands and jump down.
Anika says come, plane can crash anytime, nothing will happen. He says promise me nothing will happen, don’t know we will meet again or not, I want to say something. She says you will get many chances. They jump. Shivaye gets up and sees Anika fallen. He gets shocked and shouts.

Game of Love 20 May 2019 Update – StarLife
He runs to her and takes her in arms. He sees her wound and askps her to open eyes, is she joking. He cries. He says I told you I have to say something, is there anyone, Anika stop joking, open your eyes, nothing happened to you, I will die if anything happens, get up. He shouts Anika I love you, His tear falls on her cheek. She moves.
He says I had to say this, I love you…… He hugs her. She opens eyes. He asks are you okay. She asks are you fine. He says yes. She asks why were you shouting, what happened to me. He says its blessing a lot, you can’t imagine how many times I died in few mins.

She says you felt I have gone, I m Shivaye’s wife, whose life won’t go easily. He says promise me you won’t risk your life. She says promise me you won’t hide anything, make a pinky promise. He promises her. They smile.
He asks can you walk, you have fallen down. She says I can run, you were saying something. He asks when. She says you were shouting, so I came back from death. He says don’t joke, its not funny.

She says tell me what were you saying, I heard so. He says I didn’t say anything. She says I felt you want to say what I wanted to hear. He says what can it be, I don’t remember, I have forgotten, I got hurt, will we spend life in this jungle, come, we will try. They leave. She thinks to make him say I love you. Game of Love 20 May 2019 Update – StarLife
Rudra gets conscious and sees Bhavya. He asks am I dreaming or seeing you even after death. She asks him to get up, he is alive and fine. He asks really and gets up. He says it means my young age didn’t go waste, what a jump it was. He hugs her. He says sorry, I was overexcited to get saved, I m still your boss and you are still my employee. She says thank God, you just know to become boss, not friend.

He says I m going home. She says this is jungle. He jokes. She says its going to get dark, you are not habitual to manage this situation. He says you are elder to me but I m not a kid. She says we can help each other, I m not scared, we can reach home soon. He says sorry I forgot your husband would be waiting. She says I was just helping you.

He says I will never need anyone’s help. He goes. Shivaye says there is no signal, give me your phone. Anika says it was in my bag in plane, why are you so worried. He says I m trying to find Kalyani mills secret, I felt Shukla knows, someone attacked him in our house, I heard elders making plan of going Goa, they haven’t come, it was to mislead us, what to think, our family is behaving strange.

Tanya is blackmailing me, I don’t know the agenda. She says when darkness happens, one should see by the eyes of heart, I can’t believe our family elders can do this. He says clues sign they are involved. She says truth will come out, then everything will get clear. They leave. Rudra walks alone. He tries to find the way. He says family tadi will make me fall in problem, I wish Shivaye was here. He calls out Shivaye. He says where did Bhavya go. His foot gets stuck. He shouts for help.

Bhavya asks what does he think of himself, immature, kiddish. She hears Rudra shouting. She worries and looks for him. She says he was showing attitude, I have to teach him a lesson now. She makes animal sounds. He worries. He says I m young, I didn’t see anything in life, where is Shivaye, where did he fall. She comes to him and says you got trapped. He says its good you came, help me.

She says you are not a kid to hold my finger and walk, you don’t need help, are you saying anything. He says help me. She says its not sounding like a request. He says please help me. She says very good, I m impressed. He says I m hurt. She says promise me, you will listen to me till we go out of the jungle. He says fine, I promise. She asks sure. He says yes, I will do. She frees his foot. She says tadi doesn’t help everywhere. He thanks her.

She says you should have thanked, come, be careful. They leave. She says I hope Shivaye and Anika are fine. He says yes, I need some rest. She says you took break already, come. He says let me take some break. She says we will go till there and then stop, come. Game of Love 20 May 2019 Update – StarLife 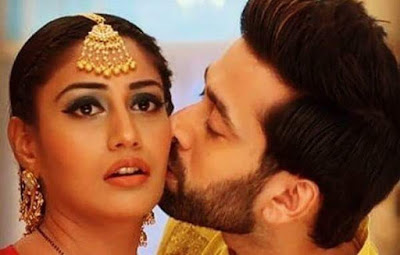