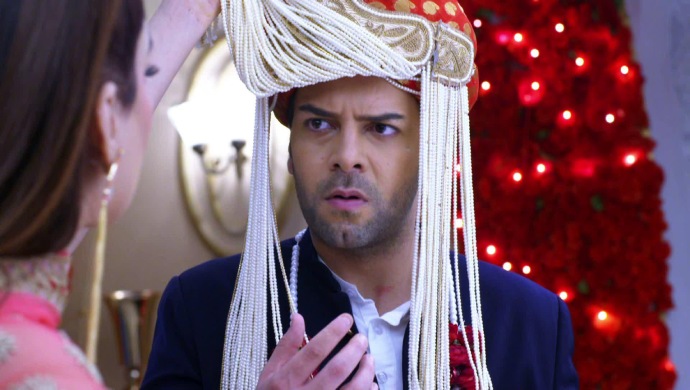 In tonight’s episode of Kundali Bhagya, Prithvi wakes up Karan to make him see him get ready for the wedding. Srishti calls up Karan to asks him to kidnap Preeta from the wedding. Prithvi finds Karan’s phone and cuts the call. Srishti goes to Prithvi’s room and finds him hiding behind the bed. Prithvi is relieved to find out that Srishti didn’t know Karan was marrying Preeta. Rishabh wakes up and decides to delay this treatment until he puts Prithvi in jail.

In the next episode, the police reach the mandap and asks Prithvi to get up and walk after them. Prithvi is surprised but doesn’t get up. Rishabh walks in with a bandage on his head and says Prithvi won’t get up just by asking. He walks into the mandap. He pick up a mug of water and pours in on they holy fire. Sarla, Preeta as well as Rakhi are shocked. Will Rishabh succeed in stopping Prithvi’s wedding?