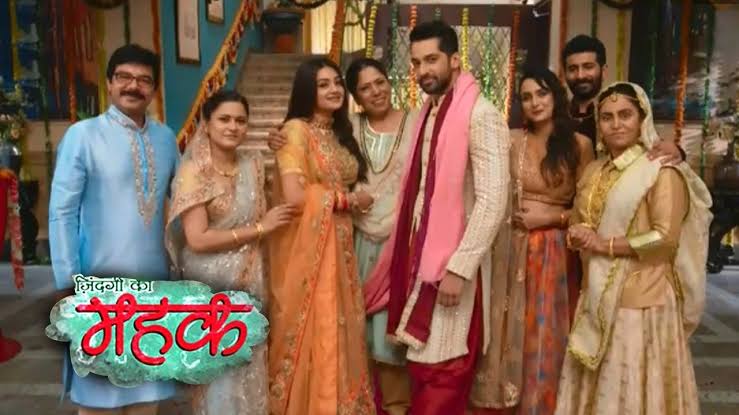 Mehek 21 October 2019 Update – Zee World – Everyone is enjoying in summer camp. Harsh and jeevan climb the net. They all play games. Kanta says why isn’t anyone here? Shaurya says this place is booked for us only. Mahek says yes we will have fun. Nehal says lets have food first. Suvetlana is outside with her men. She says it will be fun. She goes in disguised as a trainer.

Everyone is having food. Shaurya says MMahek why are you eating for three people. Karuna says why are you teasing her. Let her eat. Vicky says Nehal lets go play games. She says but kids.. Karuna says I will handle them. Shaurya nd Mahek go too. The race starts. Everyone trues to stop others. Nehal and Vicky win. Suvetlana comes in with her people. They disperse in all directions. Harsh goes to get medicine for kids. Suvetlana says come up please. All people go up.

Mahek and nehal go up. Shaurya gets a call. He goes out. Everyone is on suspension bridge? Inspector calls Shaurya and suvetlana is in your house? Shaurya says what? you arrested her yesterday. He says no we never arrested her. Shaurya is dazed. He says stop. Suvetlana and her men run from there. She has set ropes on fire already. Everyone up is scared. Shaurya says nothing will happen. He tries to blow the fire. Shaurya slowly gets up and brings everyone down.

Sutelana runs. Shaurya gives everyone water. Mahek says your hand is burned. She hugs him. Kanta says who did all this? Jeevan says suvtelana but she is in jail? shaurya says no. He tells everyone about his conversation with inspector. Shaurya says where is mom? Karuna has fainted and kids are not there. Nehal says where are my kids? She faints. Manis hugs her and says nehall.. Shaurya asks guards to look everywhere.

karuna is crying. She says its all my mistake. Shurya says don’t worry I wont let anything happen to the kids. Jeevan looks everywhere. He says lets go to police. Nehal is crying. Vicky comes to her. He says kids are nowhere. Mansi is crying. Kanta says nothing will happen please dont’ cry. Nehal says where are my kids Vicky? please do something. Mahek says please calm donw. Nehal says please come with me. My kids. She screams.

Vicky says please calm down. She cires. Shaurya says Nehal control yourself. He hugs her. He says i promise you I will find them. They are safe. Suvetlana wont do anything to them. I promise I will bring them back. Mehek 21 October 2019 Update – Zee World

Suvetlana is on her way with kids. She says their heartbeats will stop after they see what I do next. Everyone brings nehal back to her room. She screams and cries. dolly says God will protect your kids. She says but they are so little. She says how Suvetlana do this. Karuna says she is not a mother. SHe is full of hate. We thought she at least loved Vicky but she doesn’t. She has no shame.
Harsh says she prepared fake police. She makes plan b with everything. Shaurya says how could we be fooled. They call police.

Suvetlana brings kids to her thugs. The kid are crying. Doctor gives Nehal sedatives. Mahek sees everyone crying. Awara says Mahek there is a call for you. Mahek hears it and is shocked. She says Vicky come with me. Kanta asks awara where is mahek? He says she went out with Vikcy.

Police shows tracking device to Shaurya. He says put it on call when she asks for ransom. Mahek says Shauyra.. They all go out. Suvetlana is there. She says don’t blame with these dirty allegations. Ravi says I will kill you. She syas Vicky call and told me everything. I can’t be blamed of this. Karuna says it is her game.

Police says it can’t be otherwise she wont have come here. Vicky asks police to leave. They leave. They leave. Nehal comes and says where are my kids. I know you have them. Mahek says stop this all. she doesn’t have the kids. Kanta says how can you trust her. Police says we have to go. We will do our interrogation. Mehek 21 October 2019 Update

Suvetlana sits inside and says we have the babies. See them. Everyone is dazed. Mahek says we were blackmailed so we had to send police away from here. Dolly says vicky is out of his mind too. mahek says we are not mad suddenly. she shows them video of the kids crying. Nehal says my kids she is crying. she says show me. Mahek says no don’t. Kanta says you will rot in hell. Suvetlana says why do you wnt to kill the kids. Call lawyer and give me this property I will give you the kids back.

This should happen by tonight you will have the kids back. Nehal is crying. Suvetlana says ask them to give me this property if they wanna save the kids. Nehal says please dont’ do all this. She leaves. She says do as I say if you want peace in your life. Nehal cries. Mehek 21 October 2019 Update…

Balvan coughs. Kanta says papa ji isn’t feeling well. He says i can’t see my kids on this trouble. Kanta says God will help us.
Shaurya and Mahek sign the papers. Suvetlana says on call the real blast is something you wont have seen before. The countdown has started.

Shaurya is going somewhere. Mahek says where are you going? He says restaurant. She syas in all this? Tell me where are you going? He shows the chip he put in Suvetlana’s bag. she says I will come with you. Or take police. He says no you have to stay here. she says no I will come with you. Mahek and Shauyra are in rickshaw on their way. He says I asked you not to come with me. mahek says it is dangerous there. He says don’t know suvetlana.

Kanta says where is Shaurya and Mahek? They haven’t even eaten anything. She says they aren’t home. Dolly says they never tell before going. Shaurya and Mahek reach the location. They hear kids crying. Shaurya says let me go inside. He coems in and sees a phone. The kids noise is coming from it. He says Mahek.. She was fooling us. Kanta calls mahek and says please save us.

Mahek says is everything okay? kanta tells her the location. Suvetlana says if you are done being James bond come on to this address. Your whole family is there. Mahek and Shaurya rush there.

Suvetlana has tied everyone in a house. Nehal says please give me my kids back. There is a toy hanging on the kids. Suvetlana comes there. Dolly says you are disgusting. Suvetlana slaps her. She says keep an eye on them and let me know. Kanta says how can you do all this to your son and grandkids. Suvetlana says there is a bomb in this house. Kanta says kill me and let them go. she says my son didn’t care when I was going to jail but before dying you will see your kids dyiing.

Karuna says please don’t do all this. Mahek and Shaurya reach near the place. Kanta says they are here. She says tic toc.. she turns the bomb on. Mahek and shaurya come near the house. Shaurya says take this propoerty but let the family go. She says caring so much for them? mahek says you can only get the papers if you leave our family first. Her men take Kanta out.

Mahek says ma.. There is a bomb attached to her. Suvetlana says saw it? Give me papers. Mahek gives her papers. Suvetlana leaves. Shaurya and Mahek look for a way to get in.

Shaurya and Mahek look for everyone. Jeevan takes off his ropes and shouts SHaurya please save us. EVeryone is crying. The bomb’s timing is running out. A house blasts. Suvetlana says to her people when the fire is blow out let me know I will pay. Shaurya and Mahek faint.