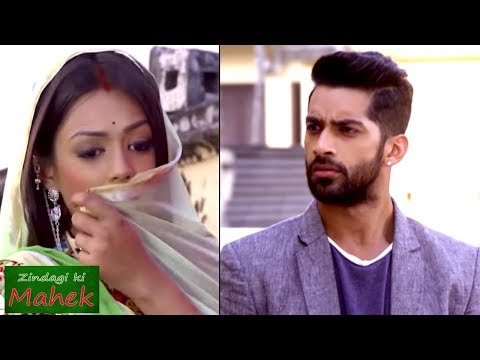 Mahek’s mother runs out and says my daughter. She and her elder daughter look for Mahek. She on the ground. Her mother picks her says I hope she is fine. She sits and cries. Her father wakes up and says she should die. How is she alive. He gets angry. Police come. They ask Anita what happened. They say to the man if you dare doing anything to the girl we will arrest you. They leave. He says I will kill her when i get a chance. Her mother hugs her daughters.

Shaurya’s parents come home. Yuvraj welcomes all his guests. His mother says our prince is here. Yuvraj says he will become a boxer. i will name him Shuarya Yuvraj singh. His mother comes in. Everyone plays with the baby.

Mahek’s sister plays with her. Dai says she is so brave already. Nothing could harm her. She fought a battle her first day. they feed her. Her mother says we will call her Mahej.
Shaurya’s grandmom celebrates. Yuvraj says I represented India as a boxer. My first son Adi is sick and daughter is of no use. My Shaurya will fulfill my dream.

After years, shaurya and his friends run after a girl.. She hides behind car. They stop her. She says this is for my Mahek. The kids try to snatch mangoes from her. Mahek comes. She hits the boys and fights with them. Her father comes and drags her home.

Shaurya does boxing practice. He hits the other boy. yuvraj says my son will become a lion. Mahek’s fahter says how dare she. she hits boys everywhere. she should die. Mahek says those boys were annoying didi. He says you are a girl stay one. Your husbadn will hit you. She says if anyone hits me I will hit them too. Her mother stops him. He locks her in the room and says she will be locked here no food for her.

Later, Mahek’s mother makes her sleep. At the other side Shaurya can’t sleep. His sister says to his brother this boxer gets scared too. WE will record it. They keep a phone there. Shaurya and Mahek see their past life. They both get up. Mahek is scared and so is shaurya.

Rashmi comes to Shaurya and says what happened? He says what if dad gets to know I was scared. She says they are both asleep. They wont know. She takes him with her. His brother and sister come. His brother says we will show it to everyone.

Mahek’s mom comes to her and gives her food. She eats it. Herr sister says eat easily. Mahek says I saw the bad dream again. I feel like its truth. Her mom says everything will be fine. Shaurya comes to kitchen. He says I want to cook. I saw a recipe on internet. It was kheer. let me make it. Mehek 23 October 2019 Update – Zee World Series

She says I wish your dad understood you wanted to do this not boxing. Dadi nd Yuvraj come. He slaps shaurya and says how dare you do this girly things. Shauyra says hit me if you want but this truth. He says I was doing exercise for boxing. I got tired. I wanted kheer. I asked ma to make but she gets tired. so i wanted to learn how to do it. He says my son,I knew you could never do this. His sister says I recorded he was scared. Yuvraj slaps her.

Shaurya and Rashmi come to his sister. Shaurya says I am sorry didi. Sweeti says we will never talk to him. we are discriminated. Shaurya says they are jealous of me. I had to lie otherwise papa would have been mad. They get mad at you all the time. She says one day a girl will come here and she will make them see the importance of girls.

Mahek’s father takes another jewel to sell it. Her mom tries to stop him. He hits her. Mahek takes out a rod and says don’t hit my mom. He slaps her and leaves. She says why did you have to fight with your father. Mahek says he wont have listened.
Yuvraj gives competition flyer to Shaurya. He says you have to win this.

Rashmi says he isn’t even 10. He says you shut up. Shaurya says what if I lose ma. How do I tell him that I don’t like boxing. She says you have to like it because your dad wont let you give up on it. You might find new friends there.

Mahek sees boys looking at boxing competition. The boys tell her its for us only. Girls can only clap there. She says I will go too. Shaurya does push ups. Yuvraj says hurry up. Do your exercise. You have to be the champ. Dadi says to his siblings go to your room. Champ is practicing. Mahek reads where she has to go. She comes to her room. Mahek cuts her hair and says I am a boy now.