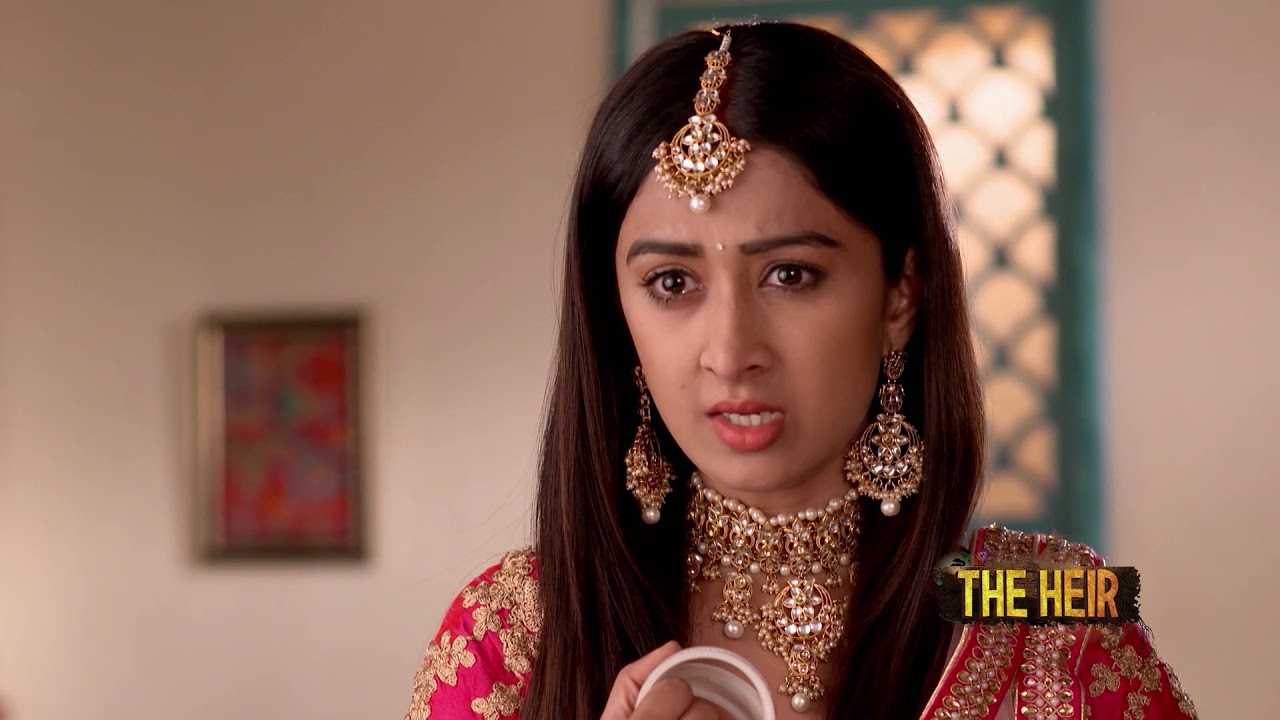 Sakshi getts ready. Mannu hides and looks on. Sakshi prepares a drink and adds medicine. Mannu goes to swap the glasses. She hides seeing Raj. Raj sees the wine. Sakshi feeds him the wine. Mannu thinks Raj has drunk it, how will I stop this now. Simran plays. Amba packs tiffin. She recalls her children and cries. Simran says I have to go out and play. Amba says if you go out, we will lose.

Simran says I will lose. Amba says if we win, we will get car and go out. Simran says no, I want to go out. Amba slaps her. Simran cries and asks Amba not to go leaving her. Amba cries. Simran says take me along. Amba shuts door and goes.

Rohan steals money from Amrit’s cupboard. She reminds his decision to stay with Harjeet. She says you did not come to meet me, today you came to take money. She cries. He keeps the money on bed and leaves. Raj gets drunk. Sakshi smiles and says I have a surprise for you. Mannu looks on and gets angry.

Raj says show me the surprise. Sakshi blindfolds him. She takes him and shows the decorated room. Sakshi asks him to wait for her. She goes. Mannu hides. Amba worries for Simran and thinks to go and see Simran once. Jagan sees Amba and says decent family women don’t go out like this at night, I will come along if you have work. She says I just came to have water. Jagan thinks your eyes show you are hiding a big secret.

Mannu comes to Raj. Mannu says look at me. Raj asks why, you are not Preet, you come in front of me, see you are everywhere, strange, the more I try to hate you, when you come in front, my heart beats. Mannu smiles.

Raj says I will give you a surprise. He hugs her. Inna sona kyu…plays….They dance. Raj holds Mannu close. Sakshi comes there and gets shocked. She shouts Raj. She scolds Mannu. Raj pushes Mannu away. Mannu says it happens in love, was it important to interfere, our love story was going on. Raj asks her how did she come inside. He scolds her. Mannu says don’t worry, I will not fall lower than Sakshi, I m with my husband. Sakshi says I want her out right now. Raj falls asleep. Sakshi kicks out Mannu and says I will finish the work which I started you will just see. She shuts the door.

Sakshi smile and seeing Raj. Mannu thinks I can’t let Raj do this mistake. Sakshi says no one will come between us now. Mannu climbs the ladder and opens the window. She sees Sakshi and Raj getting close and cries. She says we did not had love between us, when there is no love, then I should leave from Raj’s life. Ehsaas hamesha…..plays…..She recalls Raj. Raj holds Sakshi and says Preet….. Sakshi gets shocked. Mannu stops hearing this. Sakshi gets away from him. Raj asks what happened Preet. Sakshi cries. Mannu says I just wanted to hear this, I can go to any extent to save our love. Raj asks Preet where are you. Mannu gets down the ladder. Sakshi drinks and says does Raj really love Preet. The Heir 02 October 2019 Update – Zee World Series

Mohini asks Nihaal to hurry up. Nihaal asks are you sure Harjeet kept it here. She says yes. He opens the safe and gets the Kalgi. He smiles and says I got it. He locks the safe. They leave.

Simran leaves from the godown. She sees a car and recalls Amba’s words. She sits inside the car and sleeps. The car leaves. Mohini and Nihaal come to Rohan’s room and keep the Kalgi in his cupboard. They leave. Amrit sees them and asks what are you two doing in Rohan’s room. Nihaal says we came to drop Rohan to room, he is drunk, Harjeet would have scolded him. They leave.

Its morning, Raj wakes up and says why is all this messed up, where is Sakshi. Mannu gets the tea. He asks where did you go Sakshi. She asks how was your honeymoon. He asks what are you doing here, get lost. She asks him to have tea. She says you were taking my name, see I have come. He calls the manager and says a stranger girl came in my room, get her out.

He says I will not take your name even if I m dying. She asks why, you were taking my name, Sakshi added something in your glass to come close to you, even then you took Preet’s name, you love me, look there. He sees Sakshi with the bag. He pushes Mannu. He says I don’t know how Preet came here.

Sakshi says enough, you need this Preet, not me, you love her, I spiked your drink, it’s true, even then you took Preet’s name, you always lied to me that you hate Preet, you should have told me that you love her. She goes. Raj gets angry and stops her. He says whatever I m is because of you, I reached here because of you, I m on my feet, I m grateful you came in my life, you mean a lot to me.

She says maybe this is the problem, you are grateful to me, but don’t love me, I just loved you, I did not care for anything, you came here and married Preet. Mannu says don’t come in her words, accept the truth, you were drunk and took my name. Raj says enough, what did you say I took your name in drunken state, I hate you a lot because you killed my brother Raman, I can never love you, you want to see how was my honeymoon, see now. He holds Sakshi and hugs her. Mannu cries. The Heir 02 October 2019 Update – Zee World Series

Manager makes Mannu leave. Mannu says I won’t go, you just love me. Sakshi apologizes to Raj for spiking his drink. She says I love you a lot. He says I should say sorry, you got much hurt. She says my life will pass by some of your love. She hugs him.

She says if you love Preet, I will go from your life. Raj says I just hate Preet, I can never love her, she killed Raman, I m your friend, I promise to be with you all life. She says my love is enough for both of us, just tell me once that you are mine. Raj recalls Mannu.