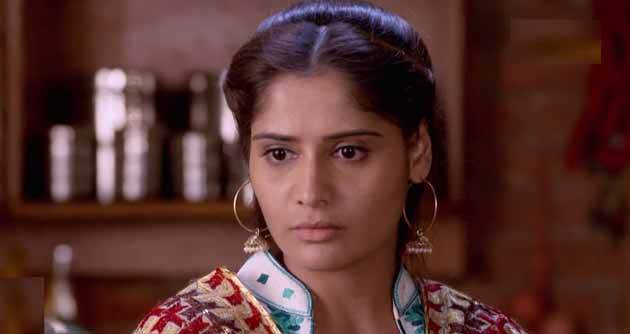 Tonight’s episode begins with Jai stopping the man and beating him. The man gets a lot overwhelmed up. Mannu and Gunjan count the cash to pay him for many punches. Mannu says he’s greedy, he’s getting many punches, he isn’t running away. The man comes and says I m not greedy, I got bit late.Amba sees Mannu and Gunjan there. They run. She asks them to stop. The goon runs away.

Jai says I will say, they have hired him to trouble you, else it can’t be a coincidence that Gunjan calls you and me at the same place. Amba asks Mannu why did he do this. Mannu says we just wanted Jai to become our Papa, so we did this drama that you fall in trouble and Jai saves you, so that you know he also likes you. Amba scolds Mannu and goes.

Mohini hears them and says so this is cooking, I will see Mannu later, none can come between me and Amba. She follows Amba and thinks to kill her. Harjeet and Swaroop come there. Harjeet asks Amba about Raman. She says how will I know about him. Swaroop says Raman has run from the city, we thought he came to you.

Harjeet says he likes to help Pavaniyas, he would have come to meet you. Amba says its your children, you should control your children, don’t waste my time. Harjeet says time will get worse when I know you have hidden Raman, I m warning you.

Swaroop says we want to know if Jagan behind this. Amba says truth is this enmity can never end because of Harjeet and Jagan. Harjeet says Raman is my son, my blood, if anything happens to him, remember you have three children. Harjeet and Swaroop leave. Mohini heard them and smiles.

Mannu comes home and meets Jai. Jai asks what do you want to do. Mannu says I know you also like Amba, we all want you to marry Amba. Jai asks do you think its a joke, you know my truth, we have hidden Bheeru’s hospital truth from Amba, relations are not made on lies, Amba will not forgive me. She will hate me the most, I request you, stop this, and let me leave from here. Mannu says that was an accident. Jai says I m responsible for Bheeru’s state.

Mannu says why don’t you tell this to Amba, I love Bheeru a lot, now you are also mine, Amba will understand as I did, she will know you did not do that intentionally.

Mohini dresses as a nurse and goes to Bheeru. She says love is bad, someone falls in love and other pays. She removes his oxygen mask. Bheeru falls short of breath. She smiles. The machine displays flat lines. She says I will ruin Amba’s world and gets leaving. She hides seeing a nurse and leaves silently. The nurse sees Bheeru’s condition and checks him. She runs to call the doctor. The Heir Update 25 August 2019 – Zee World Series

Mannu gets Amba, Jai, Simran and Gunjan to hospital. Amba asks why did we come here. Mohini sees them and thinks how did they come here. She hides. Mannu says Bheeru met with an accident, he is admitted here. Amba gets shocked. Jai says we got you here to make you meet Bheeru. The ward boy scolds Jai and says you left him in a wounded state, he is fighting with death. Jai gets angry and says nothing will happen to him. Mohini looks on. Ward boy says pray nothing happens to him, else you will go jail. Amba gets shocked and runs to see Bheeru.

Doctor checks Bheeru. Amba goes and asks what happened, is he fine, I m his sister, tell me. The doctor says sorry, Bheeru is no more. Amba gets shocked. They all cry. They ask Bheeru to get up, as he said he will come back. Jai asks how can Lord shut all doors when I m going to say the truth. Amba and family cry for Bheeru. Jai thinks I m responsible for Amba’s sorrow.

Jai asking the doctor how did this happen. The doctor says we can’t say, he had a head injury, we tried our best, sorry. Amba shouts asking Bheeru to get up. They cry. Jai says see trust me. Amba slaps him. She says you killed Bheeru, get lost from here. Mannu asks Bheeru to get up and cries. Amba and children come home. Amba recalls Bheeru.

Mannu says you did not get fine, we got you back by Jai’s help. Amba says don’t take his name again. Mannu says Jai did not do that intentionally, he told me everything. Mohini looks on. Amba asks did you know about Bheeru, why did you lie to me, are you not ashamed to take Jai’s side. Mannu says doctor asked me not to tell you anything that makes you worry. She says I could have saved Bheeru, who am I, I m your mother, why did you do this with me.

Jagan comes home and asks what happened, did anyone die. Simran says Bheeru died. Jagan gets shocked. Jagan recalls Mohini’s words. He sees Mohini. Jagan asks Amba not to worry, I will do final rites preparation. Amba says I have done final rites with all rituals. Jagan says fine if any there is any work…. She says yes, throw out Jai’s bags out. Jai is leaving.

Mannu says if we did not go hospital today, we would have not seen this day, everything ended, Bheeru went to get proof for me, but all blame came on you, what will I do without you, Amba is not listening. Jai cries and says Amba has to understand, now I will explain her, I know what to do, I will stay here, now it’s my responsibility to secure this house. Jai hugs Mannu. Mohini sees him and says I will see till when will you be with them.

Mannu sees Amba. Simran consoles Amba. She says Jai is a nice man. Amba goes. Gunjan goes to shut storeroom window. Simran stops her. She sends Gunjan and goes to the storeroom. She sees Raman shivering. She sees the window open and shuts it. She covers him with a blanket and asks him to get conscious, how can you faint, get up. She cries and worries for him. Raman drops his hand. She gets shocked. More Update Later…