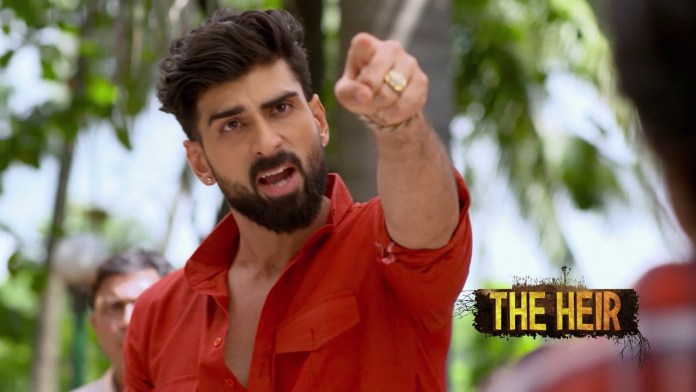 Today’s episode starts with Amba and Jagan arguing. Raavi begs Amba to assist her and stop Jagan from doing this, I did wrong with you, so I m getting punished.

Amba says Raavi has supported you in right and wrong things, what are you doing, you might be considering to remarry, why Jagan. Mohini says Jagan, your bhabhi has extra curiosity in your life. Jagan asks Amba to not intervene in his life. Amba asks Jagan is he leaving Raavi for this woman. Mohini asks why, what’s much less in me, I love Jagan, I do know he’s married and am able to turn out to be his second wife.

Amba asks her to be quiet. She says Jagan it’s unlawful to do second marriage when the first wife is there. He says I’ll marry and goes. Mohini asks them to do marriage preparations.

Mannu tells this to Jai. Jai says it means Mohini is ruining Raavi’s life. Mannu says just you can do something now, Amba will save Raavi’s child. Jai asks what does Jagan love most. Mannu says his status. Amba says sarpanch is not answering, I will go and meet him, stop crying. Mohini attacks and makes Amba smell chloroform.

She says you work a lot, now sleep for some time, the good thing is going to happen, I don’t want you stay around. She locks Amba’s room and leaves. Gunjan says where did mummy go. Raavi says she went to call panchayat. Mohini gets ready in bridal dress. She asks Gunjan to get alta. Gunjan refuses and calls her bad woman.

Mohini says yes, but if you come to my side, you will be good, tell me where is alta. She scares Gunjan. Gunjan says its in storeroom. Simran stops them. Mohini says I m going to get alta. Simran thinks Raman is in storeroom. She stops Mohini. She acts sweet to Mohini and says I will get alta for you.

Mohini asks how did you change. Simran says Raavi used to trouble Amba a lot, we used to pray to get a good aunty, I will get alta and apply to you. Mohini smiles and asks Gunjan to learn from Simran. Gunjan thinks why is Simran behaving such. Simran sees Raman and smiles. Simran applies alta to Mohini’s feet. Jagan comes dressed as groom and gets mesmerized seeing Mohini. He asks pandit to go his work. Raavi worries.

Jagan holds Mohini’s hand. He scolds Raavi and asks her to become part of marriage if she has to stay here, else leave. He asks Raavi to do ghatbandhan. Raavi does ghatbandhan. Mannu stops Jagan and reminds its his second marriage. Jagan asks him to come downstairs. Mannu says do you know how many marriages Mohini did. Jagan looks at Mohini and asks wha’s this nonsense. Mannu asks him to see and throws pics down.

Jagan sees Mohini’s marriage pics with numerous men. Jagan gets shocked. Mannu says these are her marriage pics. Mohini asks Mannu why is he spoiling her life, Jagan don’t care for him, he is very clever. Jagan says I will never trust Mannu, just tell me once, what’s truth of the pics. Mannu asks Mohini to answer Jagan, else I will say. He says Mohini marries the men and then loot them before running away, she is a cheater and this is her work, you are her fresh target. Jagan gets shocked. Mannu says I did my duty, now your wish. Mohini says he is lying. Jagan says shut up, you will make me target, if you are seen here, I will kill you. He drags Mohini out. Mannu smiles. He hugs Raavi. Jagan throwing out Mohini. He shuts the door. Jai claps. Mohini gets angry.

Jai smiles and asks did Jagan throw you out, you forgot that we fooled people together, if you can warn me to ruin these people, then I also know how to stop you, now game got equal, we both are outside the house. She says I just like two things, money and you, you did not let me get money and love, I will remember one thing, that I end the game which you started. He smiles. Amba wakes up and worriedly knocks door. Gunjan opens the door. Amba sees the havan kund. She sees Jagan sitting sad. The Heir Update 27 August 2019 – Zee World Series

Gunjan says marriage did not happen. Amba asks Jagan what was he going to do, Raavi is with you in every work and all the time, she stood by you, when she needs you the most, you were going to leave her, if anyone says Raavi is going to get a girl, will you agree. Jagan says doctor also said its a girl. She asks did Lord tell you, that doctor was not a real doctor, if its a baby boy then….. what will you do. Jagan says fine, I will wait, if its a girl, our relation is over. He goes. Amba worries. Raavi sits crying. Mannu wipes her tears and consoles her. Mannu says I won’t let anything happen to my sister, her life is my responsibility now. Amba feels proud of Mannu. Mannu asks Amba to forgive Jai. Simran goes upstairs. Gunjan finds her behavior weird. Simran asks her to go. Simran goes to storeroom and meets Raman. She gets sweets for Raman.

He says I have to leave now, you know I have run away, my dad would be finding me, its dangerous for your family if I stay here, if you hide and meet me, someone will doubt, I have to go. She asks where will you go. He says I will stay in friend’s house. She asks him to hide here, I can meet you atleast. She cries. Raman smiles and hugs her. Mohini tries to kill Amba. Mannu comes and stops Mohini. Mohini gets mad. Amba and Mannu catch Mohini and tie her to the chair. They call police. Mohini says I will kill you Amba and shouts. Amba asks inspector to take Mohini. Jagan says take her away, next time don’t try to cheat a good man, remember me. He drinks.

Mohini gets angry on Mannu and Amba. Police take her away. Mannu says Jagan framed you in wrong things, you have always forgiven her and did not make her leave home, why. Amba says I know, but I can’t forgive Jai. He asks why, Jagan did all this intentionally and never learned a lesson, but Jai did not do anything intentionally when he realized the mistake, he did a lot to cure Bheeru, I will always love Bheeru, but it’s not Jai’s mistake, he is a good person. Amba says fine I will meet him for your sake. The Heir Update 27 August 2019 – Zee World Series

Mannu hugs her. Mannu goes to Jai and takes his kurta. Jai asks what are you doing. Mannu asks him to meet Amba, she agreed to meet, prepare to meet her and make things fine, you first apologize and explain her that you are ready to become our dad, you will love us and keep us nicely.

Jai smiles and hugs Mannu. Jai says you taught me meaning of life, now you see I will never let you get hurt and fulfill all your wishes. Mannu says I just wish to have peace in this village, will you become my dad and fulfill my wish. Jai smiles and says surely. Mannu asking Jai to come on time. Mannu sees a bottle and asks what’s this. Jai gives him the bottle and says its used to trick people, when this liquid is thrown, it creates much smoke, and these pills lower heart rate, person gets fine in a moment, you can keep this. Mannu goes. Inspector comes to arrest Jai and tell that Mohini complaint about him. Jai says she is lying, listen. Police takes him, Simran goes to storeroom. Gunjan comes there and asks what are you hiding since many days. Gunjan gets shocked seeing Raman. Simran says he was injured, I have hidden him here. Gunjan says do you know what will happen if Bajwas know. Raman says I will leave soon.

Gunjan asks Simran did she tell Amba about this. Simran signs no. Gunjan says if mummy knows then… Simran says I will tell mummy today. Mannu asks Amba will she marry Jai. She looks at him. She says its big thing that I m going to meet Jai. Jai tells inspector that Mohini is framing him. Inspector says we got your info. Jai is put in lockup. Jai says I have to meet someone.

Mohini comes there and smiles. She asks Jai where are my kids, tell me. She does shayari and smiles. She says whatever happens with Amba and Mannu now, you are responsible, I told you not to anger me, you are in police station. Jai thinks what to do. Mohini talks to inspector and gets leaving.

Jai apologizes to Amba and says I did not do Bheeru’s accident intentionally, Mannu came in my life and made me meet you, the day I saw you for the first time, I wished life gives him another chance, I understood meaning of life seeing you and children, I connected with your sorrow and pain, Mannu’s dad’s dream of peace in village, I felt its my dream, I can’t take his dad’s place, but if you support, I will wish to try once. Jai sits down and says if heart has truth, Lord also does pity. He recalls Mannu’s words. He proposes Amba and expresses his love by dumb charades. He gives his hand to Amba. Wo ji adhuri si yaad baaki hai…..plays…… Mannu smiles seeing them.