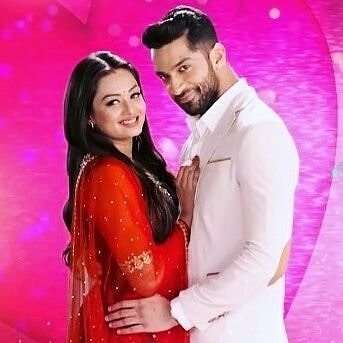 Mehek 6 June 2019 Update episode starts with Kanta informing family about fixing Mahek’s wedding to another man. Jeevan tries to argue, Kanta says Mehek tried everything with Shaurya, tried to live with him, make house with him but nothing worked so no one will argue over it now, the boy’s family is going to come soon.

Mahek heard everything standing on terrace, tears well up in her eyes and she recalls her recent intimate moments with Shaurya.

Kanta comes to Mahek, Mahek wipes her tears, Kanta says you remember when we went to desert? you used to imagine water in desert, we tried to run behind it but we never got that water, its called illusion, Shaurya is that same illusion, you will never get him, you will get burned, Shaurya Khanna is not a good man. Mahek says i took off Shaurya’s chura with my own hands, i have broken my relation with Shaurya, Kanta smiles proudly and says i didn’t give birth to you but i know you, Mahek says but I can’t marry another man.

Kanta shows her papers which Shaurya made her sign after she left his house, he signed those papers after you left and broke this relation, she says you cant keep waiting for Shaurya. Mahek says i am not having hopes from Shaurya but i want to make identity for myself, i dont want to marry now, i want to work on our new business and make is success.

Kanta says remember you promised me that you trust me with your life and will do anything I ask you? now its up to you either you dont break my trust and get ready or break me, you have one hour to get ready, she leaves. Mahek breakdowns. Shaurya comes out and is looking around food truck. He gets tensed, he sees some people missing.

Shaurya says where is half of family? did they not wake up today? Sonal says you look good taunting, you keep taunting here and there Mahek will be.. Mansi stops her, Shaurya asks why no one is telling me anything?

Mansi takes Sonal away from there. Mahek gets ready and recalls Kanta’s harsh words. Boy and his family comes to see Mahek and for marriage proposal. Groom’s mother says that i just want to see Mahek, i have seen her on Tv. Kanta brings refreshment there, groom’s mother asks if its same recipe as of India’s supercook? PD murmurs no irritably. Kanta calls Mahek and asks her to come down.

Mahek is sitting in her room and contemplating to go out to see groom or not, she recalls Kanta’s words that her relation with Shaurya has finished, she recalls her moments with Shaurya, she keep replaying everything in her head and have panic attack, she pulls her hair in frustration and cries, her phone rings.

Groom says to Mahek that i am Sandeep, people call me Sandy, Kanta says to Mahek that Sandeep is talking to you, Mahek looks at him. Mahek says I do business with my family. Sandeep says i know few things about business, from the time i got to know that we are going to see Mahek, i was excited to see girl who become so popular from being nobody.

Ravi whispers to Jeevan that this groom is more interested in Mahek’s popularity than her. Kanta says to Sandeep’s family that we all handle food truck, it our business but its nothing without Mahek, she is backbone of our business. Mahek sees Shaurya calling her and gets scared, Sandeep says its good that she handles business, i will handle food truck business after marriage, Kanta says sure son in law is like son only, Sandeep says its nice talking but i want to know Mahek before deciding anything, he asks Mahek if she is ready to go out on coffee tonight with him?

Shaurya is pacing around in his restaurant, he looks at Mahek’s food truck but doesn’t find her there and gets tensed. Vicky sees Mahek coming there any shows to Shaurya. Shaurya sees Mahek coming out of the rickshaw and looks at her worriedly. Mahek looks at him. Vicky says to Shaurya did you feel like there is something going on with Mahek or is it just me? Shaurya glares at him and goes to Mahek. Vicky says this love fire cant be dozed off easily.

Shaurya comes to Mahek and clears his throat, he says time is money if you keep coming late to work then how will you earn money? only after two days, your family is coming late to work, it’s not easy to do business, it cant be worked out with good food only, but you don’t care, you just marry and give birth to babies, typical middle-class thinking.

Mahek starts crying hearing his words, Shaurya sees her crying and asks what happened? he grabs her shoulders and asks why you are crying? Mahek holds his arm for support and says I.. she becomes conscious of seeing Kanta behind Shaurya and moves away from him. Shaurya sees Kanta standing there and glaring at them, Mahek runs away from there crying, Shaurya is worried and leaves. Kanta looks on.